So I didn’t end up doing that cross training I was talking about yesterday. . . but I did watch Spirit of the Marathon. That counts for something, right???

It is very cold here today. Right now it is 21 degrees, which is the warmest it has been all day. But with the windchill, they say it currently feels like 7 degrees outside. Great day for a run? I thought so, too 🙂 When Barry got home from work we headed out. We kept it short and did a little over 3 miles, which is good enough for me. I wore enough layers to keep my body warm, but my face was pretty cold. It felt like a hard effort, but our average pace was 9:42/mile, which is my typical pace for a weekday run. My legs are still feeling sore from my hilly Sunday long run, so I guess that had to do with it.

I have one other thing to share with you, and it is a funny thing that happened on Sunday. I am sharing this with you at my own expense, so you better appreciate it. Here’s the background: we went to the grocery store on Sunday and among other things we bought some house brand apple juice because we had a coupon. We got home, got all the groceries put away, and the fridge was full up with all of our stuff. After a little while I decide I want a glass of apple juice, so I open the fridge and grab the container and pour myself a glass. While I’m sitting at the table drinking my juice, I notice it’s a little funny tasting. I decide to let Barry know that the house brand apple juice we bought tastes weird. He looks at it and says “that’s because you’re drinking white grape juice”. That would explain why the color of the juice looked a little too light, too. Apparently we also bought white grape juice (something I was not privy to) and that’s what I actually grabbed out of the fridge. Lesson learned: always read the label. 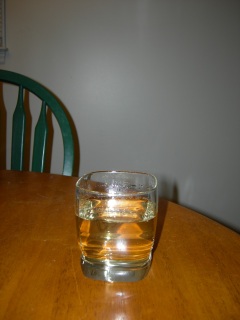 Random tidbit from yesterday that I forgot to mention: we are on a boil water notice and have been since Saturday morning. The water treatment plant lost power due to the snowstorm, which was the reason for the notice. I have two things to share about this:
1. The water I drank during my long run yesterday was still warm from having been boiled earlier in the morning. Turns out drinking warm water while running in cold air is actually pretty good. You should try it sometime!
2. I am boiling our water in our largest pot, which typically only gets used to make kettle corn. As a result, all of our drinking water tastes slightly like kettle corn!

Last night Barry and I watched the movie Looper and I spent the majority of the movie very confused. I can’t even try to explain it on here, but I will tell you Barry had to pause the movie more than once to explain to me what was going on.

Today is another day off from work, and I think I may take a rest day after yesterday’s hilly long run. Or maybe I’ll do some kind of cross training this afternoon… I’m trying to be better about cross training on a regular basis. Either way, I leave you with a little inspiration.

Today is a rest day before my long run tomorrow morning. The chimney sweep guy came to inspect/clean our chimney today. I am sad to report that having your chimney swept in real life is not as exciting as they lead you to believe in Mary Poppins. Just wanted to save you the disappointment.

We use a woodstove to help heat our house but have been unable to use it the past few weeks due to a problem with the chimney. The sweep was able to get the chimney cleared and the woodstove is back up and running!

I am planning to do my long run over at the same trail that we ran at last night. Hopefully the sun and wamer (upper 40’s) temp’s we had today helped to clear it off somewhat. Otherwise it could be a pretty interesting run tomorrow.

Good news! We never lost power last night, thank goodness! We did end up with a total of close to 10 inches of snow. Here’s a view from our back deck this morning: 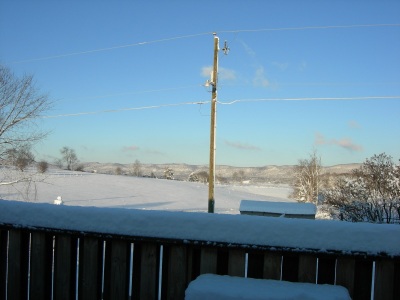 This evening I went for a run with Barry after he got home from work. We drove over to the biking trail in town, and ran 3 miles at a pretty slow pace. The trail was covered in snow (at times as deep as my shins) and had some icy patches, which made it difficult to run. There were also several downed trees and limbs across the trail that we had to climb under/over. Barry snapped a picture of me at the entrance to the trail and we tried to get one of a tree across the trail. It was already dark outside, and we took them with a cell phone, so they didn’t come out very good.

Today I was off work, since it’s a state holiday (Lee-Jackson Day). I had a low-key morning and spent time getting the house clean, doing the dishes, and watching this week’s episode of Dance Moms.

This show is so ridiculous, but it entertains me. I’m pretty sure at least 80% of it is scripted, but whatever. It’s fun to play “rate the crazy” and rate stuff from the show on a scale of 1 to 10. You gotta love those guilty pleasure shows.