Happy Mother’s Day!!
Last weekend we did a lot of work on the chicken run area that is attached to the coop. 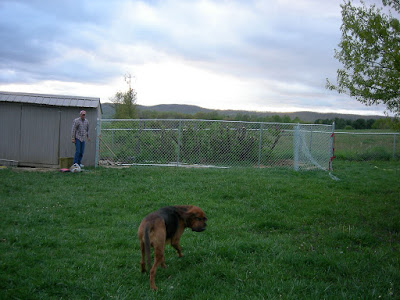 We got all of the fencing done, apart from the top rail on the short side of the fence. We were missing two extra braces we needed to attach the top rail to the end posts, but Barry picked those up later in the week, so now we have what we need. 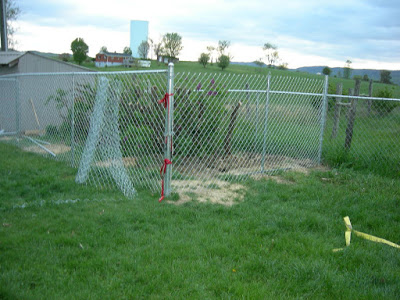 Once the fence was complete we let the chickens out to explore their new run area. This is as far as they strayed from their coop. 🙂

They were a little hesitant about it, but it was also pretty chilly outside that day.

In order to do this, we had to dig a trench around the building to bury the wire. I dug the trench all by myself! I’m proud of my work.

In the process of digging the trench I found lots of interesting things. Apparently the people who lived here before us just threw whatever they wanted to get rid of under the building. I found lots of bricks, a car battery, and lots of scrap wood with various nails and screws sticking out.

On Thursday it warmed up to the mid-70’s so Barry let the chickens out into the run area for the first time since last weekend.

Lots of pecking went on and everyone found a worm or two. They really seemed to enjoy exploring their new run.

Once we get the overhead netting on it and finish burying the chicken wire and attaching it to the chain link fence they will have access to the run at all times during the day.

Handsome Elvis
Another bear sighting on my run this morning - that’s the second one this month. This guy was swimming across the river in Hiwassee! #trailrunning #ultratraining
@the_adventure_jogger saw this on my run today… maybe something out of a well-packed Jeff Stafford first aid kit, or maybe something else? Either way, I opted not to pick it up 😂
So you say you want a bloodhound…
Birthday run/hike at Pandapas. 🥳😊#trailrunning
Black bear cub sighting on my run this morning. It was so humid, so the photo came out hazy 😕 #trailrunning