This past Saturday, Barry and I headed down to Hungry Mother State Park in Marion for a trail run. We ran separately, since we had different distances in mind. Plus, our paces are dramatically different on trails (he’s a much better climber than me). I chose to run the 5.7 mile long trail that goes around the lake. 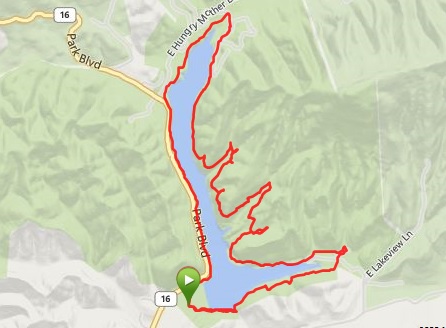 I hadn’t ever run here before, and I really enjoyed exploring some new trails. As per usual, the trail started off with a challenging hill and I was amazed at how quickly trail running can make my heart rate skyrocket, so early on.

My legs were feeling kind of tired and heavy, but I just focused on enjoying the scenery of the lake and woods around me. Eventually, after mile 2, they started to feel better. The trail wasn’t very technical, so I was able to look at my surroundings more than usual.

It was mostly shaded the whole way around the lake, which was nice. The temperature was in the low-60’s at the start of my run, but warming up quickly. Once again I ran with my Nathan hydration vest, so I had plenty of water.

The trail had rolling hills, with only one climb before mile 2 that I had to hike up. There were a lot of signs saying there was a beach overlook coming up around mile 3.6, so I focused on getting to that. But then I found myself at mile 4. I thought there would be a sign, but I guess they thought the overlook was obvious, so I totally missed it.

At this point, the trail spit me out onto a paved road and I got very confused about where to go. I came to a big parking lot a little ways down the road and saw a trail map at the end of it. It looked like I may have been on the trail the whole time, and possibly would have missed getting back on it if I hadn’t run down through the parking lot. It was very confusing, and I’m still not sure if I followed the trail correctly or not. I followed the paved path, which was marked with the navy blue blazes I had been following the whole way, over to the beach area.

The swimming area officially opened this past Memorial Day weekend. It looks like it would be a fun place to swim! And I would love to jump off of that tower. I bet the water was pretty chilly on Saturday, though. 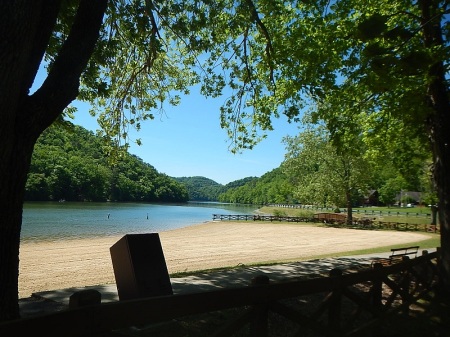 I continued on, with about 1.5 miles left to go. I cursed myself for running counterclockwise and hitting this part of the trail at the end of my run, because there was very little shade. At least there was a pretty view.

I broke the last mile down into quarter mile chunks, taking a sip of water each quarter, until I found my way back where I started at the spillway.

Since I wasn’t quite at 6 miles yet, I did a brief out and back on the part of the trail I had started my run on. Of course, this added two extra hills right at the end of my run. Overall, this run was a good confidence boost for me and was much tamer than last week.

Once I finished my run, I headed up to the lot where we parked. I was done running (or so I thought…), but had plans to hike up to a “lake vista” I had seen advertised on a trailhead marker. I wanted to see this vista! (side note: Barry wasn’t back at the car, yet, so I knew he was still out on his run)

It was quite the hike to the top, but what else do you expect when you’re doing a 1 mile climb to a lake vista and the trail starts at the same level as the lake? The hike felt tough since my legs were already tired from running. But, as usual, the climb was worth it. 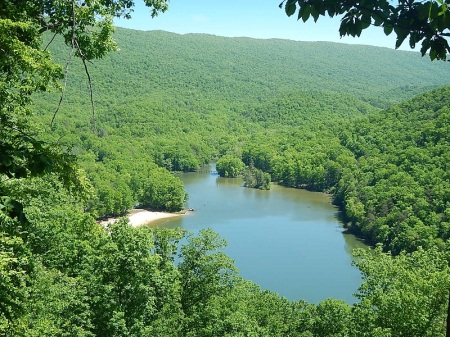 I really enjoyed getting a birds eye view of the lake I had just run around! I had planned on hiking up and then hiking back down, but instead I decided to run back down the trail. It was a net downhill, anyway, with just a few small climbs along the way.

When I got back to the parking lot, I found that Barry was back at the car as well. He hadn’t been waiting long, which was good! We got cleaned up at the campground bath house (we had both brought shower stuff and a change of clothes). Then we headed down to Chilhowie to meet up with Barry’s parents since we were in their neck of the woods. 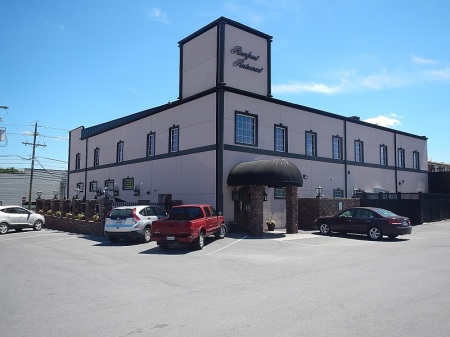 We ate at The Riverfront, which is one of my favorite local/non-chain restaurants. After some good food with good company, Barry and I hit the road home. We avoided the interstate for the most part, and enjoyed driving through all of the towns and countryside along the way. It was a gorgeous day!

What did you do this past Memorial Day weekend?