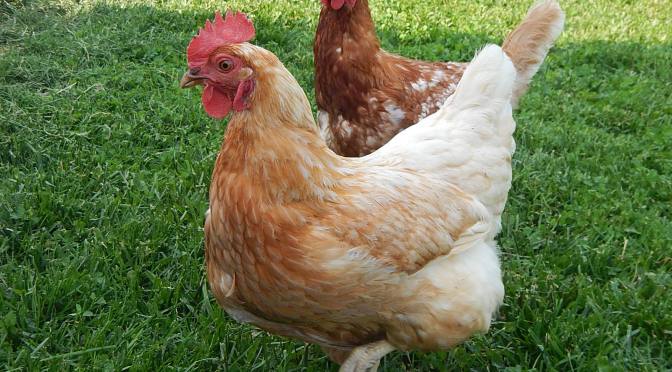 I cannot believe my 25K trail race is this weekend! How did it sneak up on me so fast?? This will be the longest run I’ve ever done on trails, and I’m nervous but also excited. While I get my game face ready for Sunday morning, I leave you with this gem of a story.

I had been out earlier in the day to give the chickens some leftover lettuce, strawberry tops, and pineapple. I unlatched the gate, gave the chickens their treat, collected eggs from the nesting box, and then headed back inside. Shortly thereafter, Barry got home from work and we put the dogs outside. I was in the kitchen and Barry happened to look out the back door and suddenly shouted “both dogs are in the chicken coop!” Begin freak out.

We both ran outside, only to find the dogs happily chasing the chickens around the chicken run. Not in an aggressive way, but as if they were playing with them. Because that’s exactly what they were doing! Barry and I calmly approached the chicken run and called the dogs out of the run. Then we counted the chickens. One, two, three, four, five…. Hmmm. Someone’s missing.

First, I decided to take the dogs inside. Then I headed back out into the yard to help Barry look for our missing chicken. She was nowhere to be found. But we were pretty sure she was still alive, since there was no evidence (ahem… blood, feathers, etc.) to the contrary. Finally, I noticed the dogs had tried to dig under the chicken coop. We have hog wire buried around the chicken coop, specifically to keep the dogs from going under it. But the chickens can still fit, and that’s where our missing chicken was!

It turns out only one of our chickens (Cecilia) actually has a sense of self-preservation, and took refuge under the chicken coop when the dogs “attacked.” Once located, she was easily lured out with some cracked corn. With all six chickens safe and sound, we closed the gate to the chicken run.

Oh yea. That’s how the dogs got in this time. I forgot to close the darn gate!

So the chickens survived another potential massacre. I could have grabbed my camera and documented the entire episode, but I didn’t.

Barry has decided the dogs are no longer a threat to the chickens, and we should let them back into the chicken run so that I can take some pictures. But I’m worried if we willingly let the dogs in they may act differently.

What do you think? Would you willingly let the dogs into the chicken coop?
I think I’ll just thank my lucky stars the chickens are still alive. Bear in mind Hank tried to bite their heads off when they were babies living in our garage.