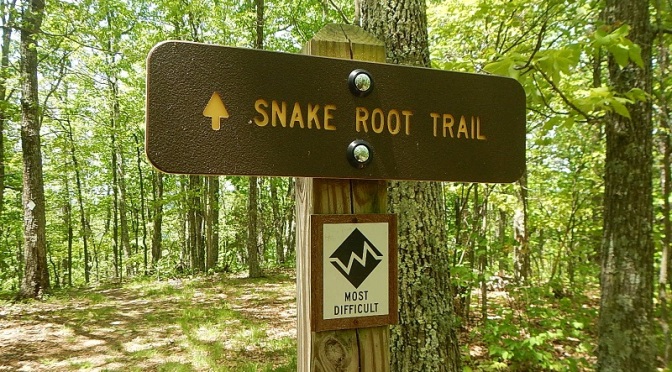 It was a cool day for mid-May, with temperatures in the high 40’s at the start and mid-50’s by the finish. I went with a t-shirt and shorts, but as I walked over to the trail from the parking lot I worried I was underdressed. It ended up being fine, though, and I warmed up after the first half mile. I had a plan in place, and I started up Horse Nettle Trail for the 3 mile climb up Brush Mountain. 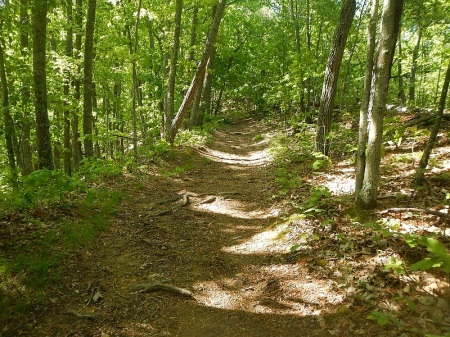 I focused on taking it slow and steady up the inclines, and switched to hiking when needed to keep my heart rate under control. I knew I had a long way to go. I’ve also decided that walk breaks during a trail run (especially one that goes up a mountain) will furthermore be referred to as “hiking.” Soon I found myself back on the fire service road.

I did better at the 3 mile climb up Brush Mountain than I did last time. This time I covered mile two 1 minute and 40 seconds faster, and I made it to the top about two minutes faster overall. Work in progress. Once I crested Brush Mountain, I headed down Jacobs Ladder Trail which goes down the mountain. Barry had warned me this was a trail I would rather run up than down, and he was right. 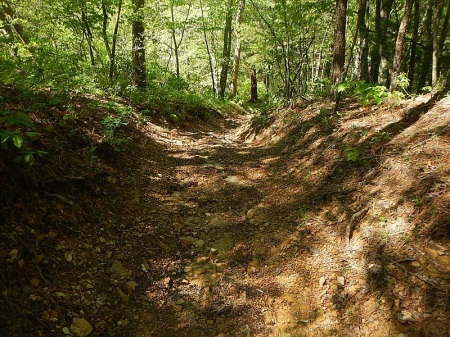 The trail started with a few switchbacks, and then plummeted down the mountain. It had a lot of roots and rocks, and seemed washed out from the heavy rain we had last Thursday. But I need practice running down this kind of terrain as much as I need practice running up it. So I think it was beneficial, and I made it down with all my bones in tact. 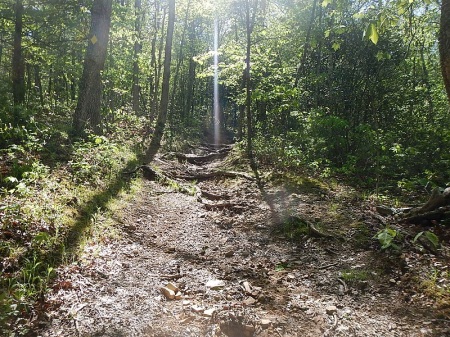 At the bottom of Jacobs Ladder, I had my first creek crossing of the day to get over to the Poverty Creek Trail. The water was icy cold and came up about mid-shin, but it felt very refreshing.

I hung a right on Poverty Creek Trail and ran the 2.5 miles back to the parking lot where I had started from. When I got back to the lot, I was 6.6 miles in. I took a short break, stretched, had a gel, and drank some water before heading back out.

This time I headed back down Poverty Creek Trail, with plans on catching a different trail back to the top of Brush Mountain for summit #2. I enjoyed the gentle rolling hills of Poverty Creek, knowing I still had one more major climb. It’s a good thing I didn’t know what was in store or I may have just headed back to the truck. My legs were feeling pretty gassed.

I arrived at the intersection of Poverty Creek and Snake Root Trail just after mile 8, and hung a left on Snake Root to make the second climb of the day up the mountain.

Snake Root covers the climb up Brush Mountain in just two miles, instead of three, so I knew it would be very challenging. I also knew it was good to practice doing a tough climb late in a run, because this is the elevation profile for the Conquer the Cove 25K:

The trail started gently for the first quarter mile or so, and then things got serious. I had to do a lot of hiking and not much running on the way up.

I also saw my first random thing while out on a trail run. From what I’ve read of folks who run trails and especially ultramarathons, it’s very common to see oddities out in the woods. Anyone want to explain this one to me?

When I was almost to the top of Snake Root (and nearly 10 miles into my run) I looked over my right shoulder and realized there was a pretty spectacular view from the trail. You wouldn’t miss it if you were going down the trail, but you might miss it on the way up if you were just focused on getting up the trail.

Here is what it would look like going down the trail, where the above view would be to your left.

Finally, I made it back to the top of the mountain and got back on Horse Nettle. I snapped a quick picture of the sign for Snake Root, which is designated as a “most difficult” trail, and that it was. 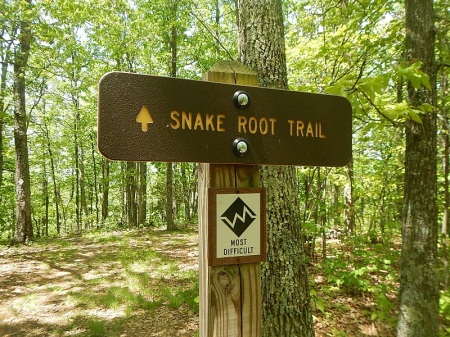 I did a brief out and back to the end of Horse Nettle, and then I started heading for home. Back onto the fire road I go. As I made my way down the gravel road, I could hear the echoes of gun shots from the nearby shooting range. Funny how you don’t hear them on the backside of the mountain. 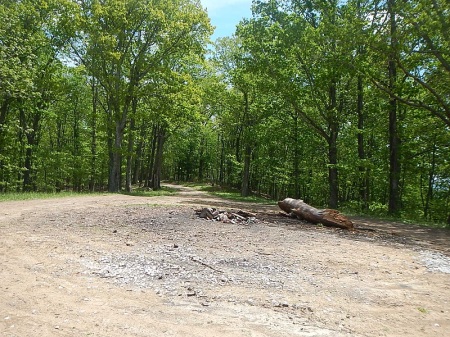 I covered the last 3+ miles without any walk breaks. It was a net downhill, but there were still a handful of inclines. My legs were very heavy and I was very tired by this point, so I’m proud of digging deep to finish the run strong.

I got exactly what I was looking for on this run: trails and lots of climbing. I also managed not to have any ankle rolls, and only one major trip (no blood, at least). That’s a record for me. I still love my new trail shoes, too. 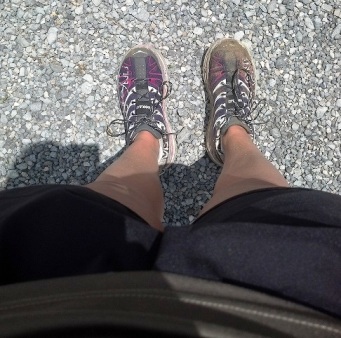 I needed this run, both to train my body and my mind for the Conquer the Cove. All I’ll have to do on race day is run two miles further! I know the race is going to be incredibly challenging, but I hope I’m a bit more prepared for it after this run.

Have you ever seen random things in the woods or on trails?

Thanksgiving ✅ On to Christmas…
Bring on the upsets, the drama, the underdogs, and the histrionics. Let’s see who is the best in the world!! #fifaworldcup
Thanksgiving is always a puzzle. Luckily, I happen to like puzzles… and lists. 😊
Halloween decorations put away. Thanksgiving decorations in full effect. Michael Bublé and Mariah Carey are defrosting as we speak. 😉
Guess it’s about time to say goodbye to Halloween and switch to my turkey stuff 🦃
These are my pumpkin carving skills after being up for 46 hours straight, taking a 4 hour nap, and then driving for 4ish hours. I don’t think I did too bad 😜