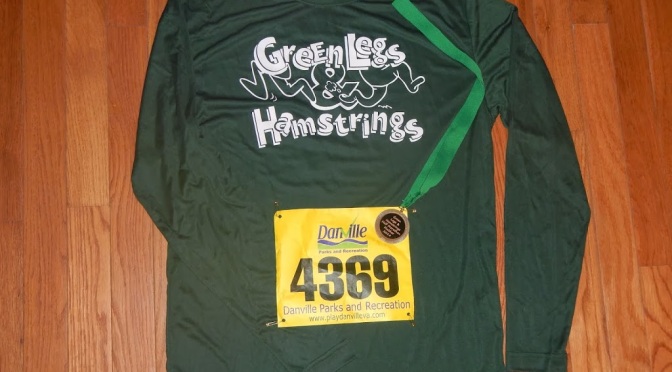 I tried not to make this long and wordy, but I failed. I’m sorry about that, but I hope you enjoy the triumphs and horrors of my first trail race!
——————————————
Last Thursday night a small snow storm came through the area. It only dumped 2-3 inches on us, but in an unusual turn of events it dropped over 5 inches on the Southside area. That happens to be the area where this race is held. The snow stopped by mid-morning on Friday, but then they proceeded to have freezing rain until that evening. This created quite the set up for my very first trail race. 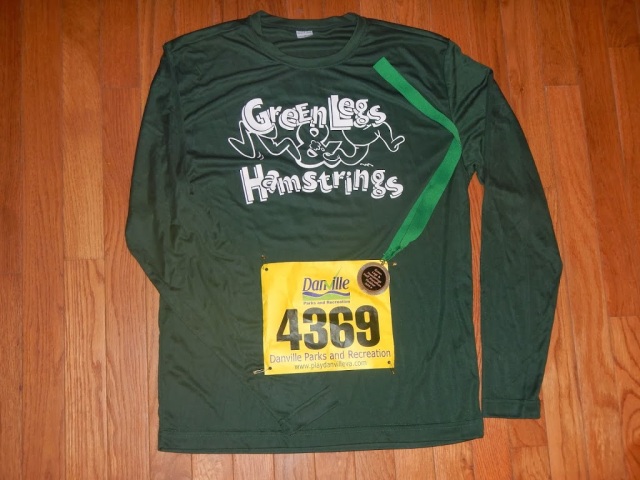 On Saturday morning the race was still on, so Barry and I headed out to make the 2.5 hour drive over to Danville for the 10 AM start. About an hour into our trip, we found out that the race had been delayed by an hour to allow some of the ice on the trails to melt. Well, at least we were definitely going to be on time. We arrived at Angler’s Park, picked up our bibs and race packets, and hung out until race time. It was turning into quite a warm day for early March.

Just after 11 AM, they sent us on our way. There were 109 runners total, and 34 of them were half marathoners. For awhile there were plenty of people around, but after the 5K split off the runners were few and far between.

About an hour into the race, I came through the first water station. A very helpful volunteer grabbed my bottle from me, refilled it with water, and sent me on my way. Shortly after that, the 10K’ers split off and I was alone in the woods. Every once in awhile I would catch a flash of color behind or in front of me as I wound my way through the woods. But that was about it. Instead of paying attention to the distance on my Garmin, I just focused on how long I had been running, in case the distance wasn’t accurate. I expected to be able to finish within 3 hours so I just took the race an hour at a time.

All of the trails were single track, for the most part, and after the 5K split off I never got passed. I did pass about 5 people in the second half of the course. One of these people was a girl I nicknamed “backpack girl” because she had a hydration pack. This girl cut the course at least twice, as I passed her three different times without her ever passing me back. The first time she did it we had just come around a long curve where the trail ran parallel to itself (like a “U” shape). Here she came straight across, cutting the curve. She saw me and said “oh, is that the race course!?” and I said yea and kept going. I was a bit frustrated because I felt like the course wasn’t that difficult to follow, but didn’t think much of it because maybe she did get confused. But then the same thing happened a second time about an hour later… At this point I was kind of angry with her. I just felt like I was out there working hard, and here she was cutting the course and continually getting back in front of me. Not to mention she had headphones on and couldn’t hear me when I asked to pass.

I kept plugging away, taking one gel each hour, and waiting for the second water stop. About 2.5 hours into the race there was a volunteer in the woods making sure we turned the correct way at an intersection. I asked him how much further and he said about 3-4 miles. Awesome! I was going to do this. Then, 30 minutes after that and 3 hours total into the race, I finally arrived at the second water station. I was nearly out of water, and had been contemplating putting snow in my water bottle when I finally arrived. I asked how close I was to the finish and the lone volunteer at the water station encouragingly told me 3 more miles! What?? It was 3-4 miles left 30 minutes ago! I headed back into the woods, feeling like I was going to cry. Instead I just kept running. I passed another water station shortly after that, but still had plenty of water in my bottle.

A little while later, I came to a creek crossing that was knee high with rushing water. There was a volunteer there, making sure we didn’t get swept away I guess. She was very encouraging and told me I was doing such a great job. She assured me that the finish line was less than 2 miles away and that the next (and final) water station was about a mile away. So there were 4 water stations total, the first was about 1 hour into the race, and the final 3 were in the last 37 minutes I spent on the course. Not the best set up. But I have to say, the volunteers working at the water stations were awesome.

I kept going after the creek crossing and came to a steep hill that I had to walk up. There were plenty of these throughout the race. They were so slick from the snow, slush, and mud and sometimes I would slip forward and have to use my hands to get up the hill. I also started having issues with the inner part of both of my quads cramping on the hills. This started a little over 2 hours into the race and lasted the rest of the time. Sometimes they would get so bad I had to come to a complete stop on the hill and once I actually cried out because it hurt so bad. Luckily, I didn’t have any issues on the flat or downhill portions. I also got very good at sliding on my feet down those slick downhills.

Finally, I arrived at the last water stop. The finish was less than half a mile away, so I didn’t stop for any water. The volunteers cheered me on as I made my way down the gravel road to the finish. Barry appeared at the bottom on the hill and yelled “look at you!” He had finished in 2:59 (his road half PR is somewhere in the 1:20’s…), finishing second in his age group, and was worried it was going to take me over 4 hours. He ran me in to the finish and I have never been happier to see a finish line, even after my full marathon last fall.

I crossed the line in 3:37:18. I was wet, covered in mud, exhausted, in pain, relieved to be done, but also happy. I had finished my first trail race, and it sure was a doozy. Barry told me how proud he was of me and told me that I was a tough little booger, which made me smile. All I wanted to do was sit down, so we took up residence at a picnic table under the shelter at the park. They had water, Gatorade, Chick-fil-a nuggets, ham and turkey rolls, bananas, and apples at the finish. I grabbed a banana and a turkey roll, and Barry brought me a Gatorade. We watched some of the other runners come in, and then headed over to the car to get our clean clothes and dry shoes to change into. It felt good in the sun and my legs, hips, and lower back were so sore that I just laid down on the warm pavement in the parking lot. There were times during the race that I was hot and other times where I was freezing because my feet were soaking wet. Just laying in the sun felt wonderful. 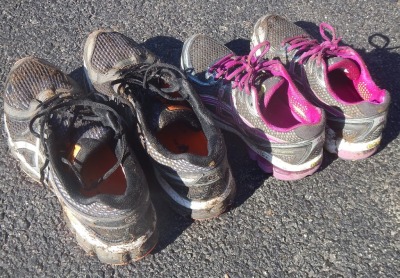 We got cleaned up and hit the road. I wasn’t feeling well, but once I got some food in me I felt a lot better. The next morning my back and hips were very sore, as well as the part of my quads that cramped during the race. The bottom of my feet also felt kind of bruised. Also, I apparently kicked in the inside of my lower legs with the opposite shoe a lot during the race, judging by the scrapes and bruises I have there.

Despite all of that that and how very tough this race was, it is definitely one I’d run again. Except next year Barry and I will wait to see what the weather forecast is, and then will just register on the day of the race if conditions are favorable. It’s going to take some very powerful finish line amnesia for me to do another trail race in the snow! Or I at least need to invest in Yak Trax before the next one.

Have you ever run a race in the snow?

Have you ever had leg cramps during a race?