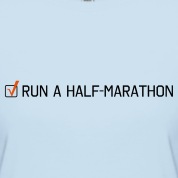 That’s right, this afternoon I ran 13.1 miles with Sven. You know that saying “I’m only half crazy” that goes with the half marathon? Well, I think when you take a half marathon and put it on a treadmill it becomes full crazy. I used movie entertainment to keep me going. Before my run, I narrowed it down to four movies. 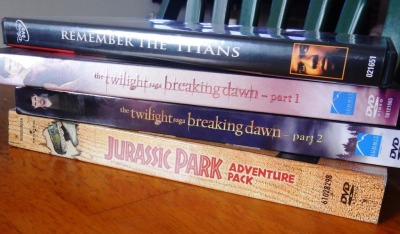 I ended up going with Remember the Titans. You can’t beat a great football movie with an awesome soundtrack. I especially love this movie because it centers around the high schools in the area that I grew up in and it’s focused on the era my dad grew up in, which is pretty cool. Once I finished that movie, I still had roughly 30 minutes to go, so I put in Jurassic Park. I skipped right to where the action starts. Barry says I am not allowed to watch Jurassic Park while running anymore because the T-Rex is too loud.

I guess that roaring (is that the sound T-Rex’s make??) can be heard throughout the entire house when you have the TV turned up loud enough to hear it over the treadmill. In addition to the movies, I kept myself going by keeping a towel over the treadmill display and playing with the incline. I fueled with two Vanilla Honey Stinger gels, one Salted Caramel Gu, and water. And the whole reason I did my long run on the treadmill in the first place? It’s snowing again outside, adding to the 18 inches we already have, and we are having 16-20 mph winds which is causing snow drifts on the road. No thank you.

Speaking of movies, I have been watching more than I usually do lately. On Thursday night I watched Easy A, which still makes me laugh out loud. On Friday afternoon I started Crazy, Stupid, Love, and I finished it this morning. Friday night Barry and I watched The Great Gatsby (I think they used the cliff notes version of the book to make the movie…). Then there was Remember the Titans and most of Jurassic Park while I ran. And lastly, I am currently watching Sixteen Candles as I type this. That’s a lot of movies.

What’s the longest distance you’ve ever covered on a treadmill?

Which is your favorite movie from the ones I’ve watched over the past few days?

Does anyone else have Monday off of work?
I do!