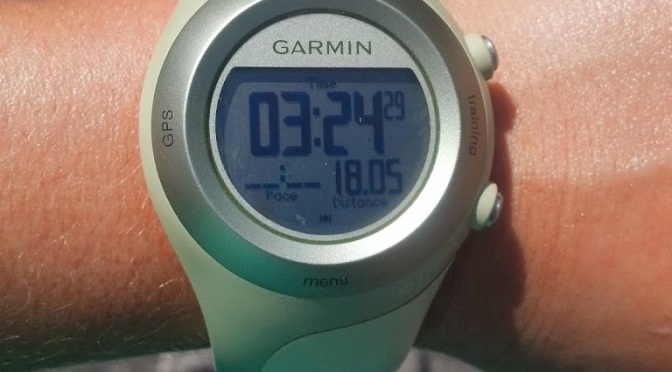 I woke up this morning feeling sleepy after having a restless night of bad dreams (none of which I can actually remember) and having to get up twice to tend to Hank. Every once in awhile Hank will get itchy paws and he will lick them non-stop until they are raw. So we put socks on his feet to keep him from doing that. Well, even though we put deodorant on the socks to deter him from chewing through them, he still chewed through two last night. So I got woke up to the sound of him ripping them off and had to put new socks on. That resulted in me sleeping in an extra 30 minutes this morning, which meant I got out for my 18 mile long run a little later than planned. 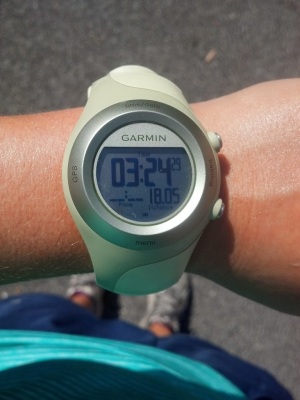 I was on my own today. Barry is at work and Kim, my running buddy, had plans with her family. That’s not necessarily a bad thing, though. There are at least two good things about running solo: 1. You don’t have to worry when you leave the house 5 minutes later than planned; 2. If you crash and burn during your run, at least you’re not dragging someone else along with you.
I started out on the Dora Trail and connected up to the New River Trail. The first 6.5 miles of my run went really well. My legs felt good and I was in that happy “I love running” zone. At 6.5 miles I ate two Shot Bloks.

I hit a little bit of a rough patch during mile 7, but then I got back into a groove for miles 8-10 and even ran a few miles in the 10:30’s. A little bit past mile 10, I arrived at the New River trailhead, where I filled up my water bottle at a water spigot and had a Strawberry Banana-flavored Power Gel.

I started to feel pretty tired during miles 11-12, but I just focused on pushing through. I didn’t want to give in to a walk break, yet. You know you’re running too far when you get to 12 miles and have to use both hands to figure out how many miles are left. I can’t even fathom 26.2 miles right now. I would need both of my hands and either a friend or one of my feet to figure that one out

Miles 13-14.5 were even tougher, but I continued to fight, knowing I would be back at the truck at mile 14.5. That meant I could take a quick break to stretch and refill my water bottle. I ate two more Shot Bloks and grabbed my iPod so I could listen to some music for the final 4 miles. 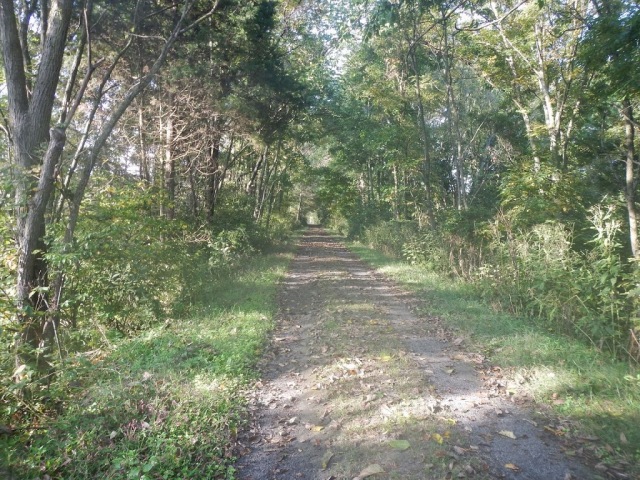 During miles 15-16 I decided to run around town a bit. I was feeling very tired and ended up taking my first walk break at mile 15.5. I was proud of pushing that far before giving in to my first walk break. However, it really didn’t make me feel any better.

Mile 17-18 felt like the longest mile of my life. I had a moment of weakness and took my second walk break of the day at mile 17.2. But hey, 18 miles is the furthest I’ve ever run. I think taking just two walk breaks during the entire run (even though they were towards the end) is an accomplishment. The below comic pretty much describes my life from mile 17-18, except put 17 in place of 18. 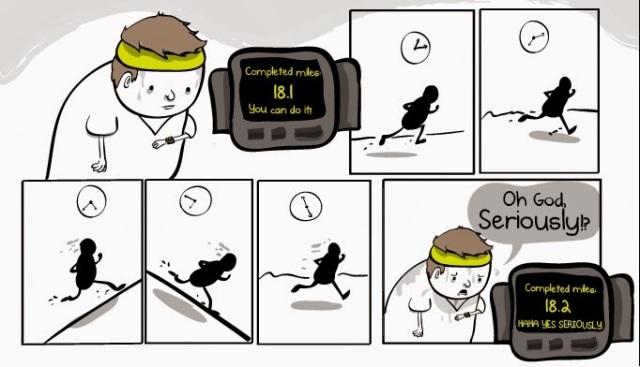 The weather wasn’t bad today, but wasn’t exactly ideal either. It was 58 degrees at the start and 75 degrees by the time I finished my run. Not what you’d typically expect for October, but good practice in case it’s unseasonably warm this November in Charlotte. By default, I also practiced for Charlotte’s hills. My Garmin claims 3,396 total feet in elevation gain for today’s run. We’ll take that with a grain of salt, but I think it should be pretty good training, since the elevation chart for Charlotte indicates a total elevation gain of 1,168 feet.

Once I got home, I had to feed and water the chickens. Then I grabbed a quick shower and fixed some breakfast (scrambled eggs with salsa, yum!) before sitting down to watch the Hokies play the UNC Tarheels. It never felt so good to sit down on the couch! The Hokies won 27-17. That, combined with the goodness of the couch, made for a great afternoon.

Do you prefer to workout solo or with a buddy/group?

What is your fuel of choice for long runs?

8 thoughts on “I survived.”

Into the Darkness nighttime trail run race report is on the blog. This one is always a fun one! Link in profile. First photo: @jayproffitt #trailrunning
Sunday naps with Hank. Not sure why the big guy always chooses the smaller mat. 🤷‍♀️
Nighttime miles with @nrvrun4meg during her 48 hour challenge!
Three amigos on my run. 😊
What.
New babies. Here we go again.