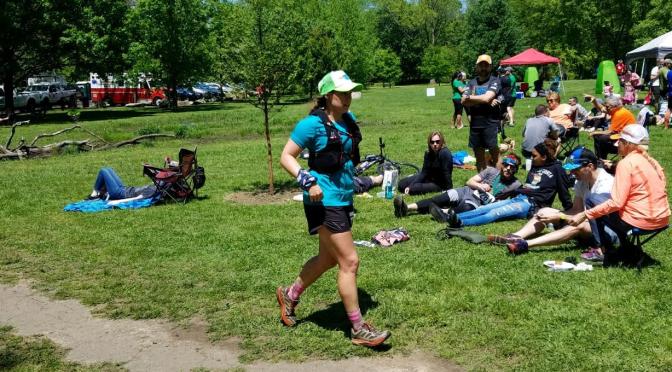 I could just cut to the chase. This race report will be a little different than those I’ve written in the past, because the Dirty German 50K was my very first DNF (did not finish). But let’s start from the beginning.

I signed up for the Dirty German 50K to get in a final long run before tapering for the Dam Yeti 50 Miler. Furthermore, I had heard great things about the folks at Uberendurance Sports and the events they put on. I was really excited to get in a supported long run on some new-to-me trails. Unfortunately, I woke up with a stomach virus on Thursday morning before the race.

The virus only lasted about 12 hours, but it took a lot out of me. I was able to keep ginger ale and Gatorade down on Thursday night, and nibbled on some Saltines Friday morning. By Friday afternoon I decided I felt well enough to give this thing a try, so my dad and I hopped in the car and headed up to Philadelphia.

We checked into our hotel, and headed out to find some dinner. Although the virus was gone, I still just didn’t feel great and food was not appealing at all. I ordered chicken and rice for dinner, and mostly just picked at it. Race morning rolled around and we headed over to the start. It was a large race, but we were able to find street parking easily. I grabbed my bib, and had just enough time to make one loop through mile-long bathroom line before the start.

If you didn’t already notice, the race had a German theme, and we got to enjoy some polka music by an accordion player at the start line. Just 36 hours after the last time I puked, I toed the start line of the race. (Sorry if that’s TMI, but I keep it real. Just wait…) The weather was perfect for a race, the atmosphere was fun, and I was hopeful that things would just work out somehow.

I was feeling okay as I ran towards the first aid station at mile 3.5. I was definitely a bit weak and lacking energy, and it just did not feel good to be hot and sweaty so soon after being sick. But at this point, I thought I might be able to get through this whole race. The trails were pretty, I had good company around me in the other runners, and I was happy to be outside.

I rolled in to the first aid station and they had an awesome spread – and I wanted none of it. I had sipped on water during the first miles and managed to eat a few Honey Stinger chews, but that was it. I grabbed half a pickle spear and walked over to catch up with my dad, who was biking around the course to crew me. I spoke with him briefly before heading up the trail.

This stomach virus had such bad timing. I really enjoyed running through Pennypack Park at this race. The trails were very runnable with a few fun, technical sections. There were times that I could look around and not even tell I was in the middle of Philadelphia. And then there were other times where we would run through areas with urban features and graffiti.

The first part of the stretch from aid station 1 to aid station 2 got pretty congested. We were running along singletrack trails, and the lead pack of 25K runners (who had started 30 minutes after the 50K) were catching me. As they were zooming by from behind, I also started to encounter the lead 50 Mile runners on their way back (they started 30 minutes before the 50K). And I was the turtle in the middle of the highway. 🙂

We finally got off of the singletrack and onto a wider trail along the creek. Some parts of this trail were swampy, with some big mud puddles. They were fun to run through, but I can definitely see where this section could get miserable when the city has had a lot of rain, like in years past. I was having fun, but things were starting to go downhill for me.

As I neared aid station 2 at mile 7.5, I started to feel pretty bad. I felt like I might need to go to the bathroom, and my stomach was feeling like it was full of air. I kept having waves of stomach cramps that were so painful I wanted to curl up in a ball. I still hadn’t given up on this race, though, and I drank a cup of soda at the aid station (Ahem… Pepsi instead of Coke. Come on, man.). But again, I couldn’t bring myself to eat any food. My dad was there, and he said I needed to eat something. I don’t think I was rude at this point, but I made it clear I did not want anything. I headed back out on the trail towards aid station 3 at mile 12.

The course was a 25K loop in the shape of a figure eight. So even though aid station 1 and 3 were in the same spot, we only backtracked on a small portion of trail (that congested section from earlier). The 50 Milers and lead 50K runners were on their way back out again, so there was some traffic, but it wasn’t too bad. I kept trying to appreciate being out there, but my entire GI system was in the process of taking me down. Here’s some more TMI – I would have severe gas pain, would pass some gas, would get about 45 seconds of relief, and then the cycle would repeat. I don’t think this was remnants of the virus, so much as just trying to run a trail race on a system that was empty and out of whack. But who knows.

I made two pit stops on my way to aid station three, but it didn’t make much difference. I was feeling so awful, and was also getting dizzy on the uphills. I started to realize my day was probably over. The frustrating part is that my legs and feet felt great. They were ready to run! I finally made it to aid station three, where my dad was waiting. I bent over with my hands on my knees and moaned and complained, passed more gas, and day dreamed about laying down. But there was a tiny bit of resolve left in me. I thought if I could get some ginger ale from the aid station maybe I could get through this still, somehow. But they only had water, Pepsi, Gatorade, and Mountain Dew. An aid station volunteer was so encouraging – she recommended some potatoes with salt (I did have one small piece). She also encouraged me to focus on hydrating while I finished the loop, and to not give up.

I trudged on, determined to at least finish one loop. By this point the effort of going uphill was almost more than I could handle. And I couldn’t stand to run downhill because of all the air in my stomach. I wish I had been able to figure something out for this, but it was so different from other GI-related adversities I’ve faced during other races.

The final 3.5 miles took me forever. I could hear that accordion at the finish line playing for nearly a mile. I finally arrived at the finish and wasn’t sure what to do, having never DNF’ed a race before. I ran through the loop side of the finish line and informed the race staff that I was done. They sent me over to the timer so he could mark my bib number in the system. And then it was done.

After I finished speaking with the timer, a race official gave me a finisher’s medal. I was surprised and asked “I still get one of these?” And he replied “Yes, you completed the 25K.” The medal is a combination medal for all three race distances, so I guess I felt okay accepting it. I did not complete the race I signed up to run, which is disappointing. But I feel like 15.5 miles was an accomplishment in itself, given my circumstances.

After the race, my dad and I hung out in the post race area. There were lots of people hanging out, and it was a fun and festive atmosphere. As promised, they were cooking up some fantastic German food. I had been so looking forward to bratwurst at the finish. But it didn’t appeal to me at all, and I could barely even stand the smell. I managed to eat a couple of fig newtons and a few pretzels.

The race had a long cutoff time, and I practically had time to walk another loop. But to what end? I felt terrible, and there was no point in pushing my body further just to get an official finish. It was’t going to be beneficial training for Yeti, and I don’t know how long my recovery would have been if I had forced myself through another 25K.

So there you have it. The story of my first DNF. I’ve always been afraid of opening the door to DNF’ing at an ultramarathon. I feel like once you do it the first time, it will get easier to do in the future. However, I feel like this was a special case. And it was probably the right call. Fifteen days to Yeti!