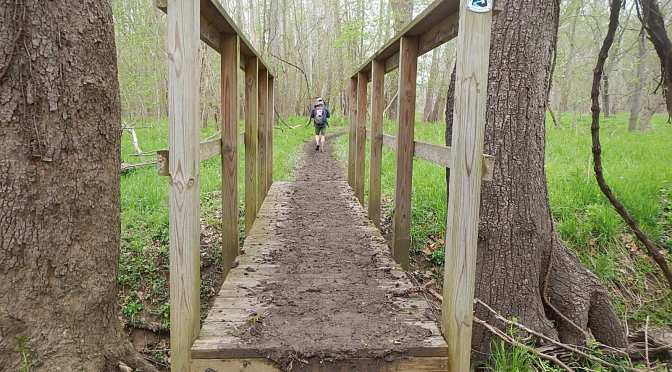 I know, I know. How can I possible have anything else to write about after that novel of a race report, right? Well, there’s a lot more because there was a lot that went into this race and hey, it was a long race. But most of those stories are going to stay on the trail. Here are a few extra details from race day that did not make it into my race report.

About two hours before the start I had my usual cup of coffee and two packets of apples & cinnamon instant oatmeal with milk. After arriving at the race I ate a banana (about 45 minutes before the start).

I had a fueling plan going into the race. I was going to consume 100-200 calories per hour, which had worked well for me during training. My plan was to drink plain water when consuming fuel and then drink Tailwind from my hydration pack in between. But I did a really bad job of fueling during the race. Time kept sneaking by and I forgot to eat as planned. Luckily, I got away with it somehow (probably thanks to my potatoes and salt).

It was hard to remember to eat and drink because I just never felt thirsty or hungry the entire race. I know that part of the problem was the weather. I never feel like eating or drinking when it’s cold and raining – that’s just the way it goes for me. Next time I definitely need to pay attention to fueling, because it’s important.

In total during the race I ate:

My appetite the day after the race was voracious, and I definitely made up for my lack of hunger on race day.

Going into the race I had a plan to put a lot of emphasis on my heart rate and staying in the aerobic zone. This worked really well for me during my final long runs in training. However, despite my best efforts, my heart rate was never really where I wanted it to be. I think it stayed higher because of the extra effort running through the insane mud. So I ended up having to run mostly on perceived effort, and luckily it worked out.

A lot of people worry about getting lost in trail races. I wasn’t too worried about that going into this race, for whatever reason. During the race, I was happy to find the course was really well marked. Never once did I worry I was not on course. There were ribbons in the trees (the color corresponded to your race distance) and there were signs at trail intersections letting you know where to go. 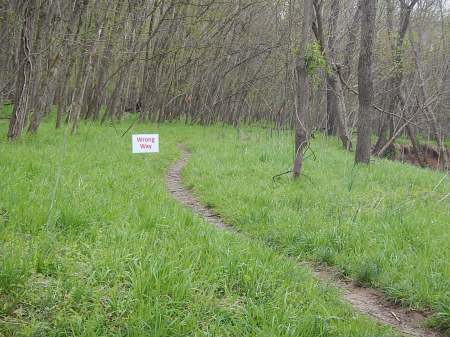 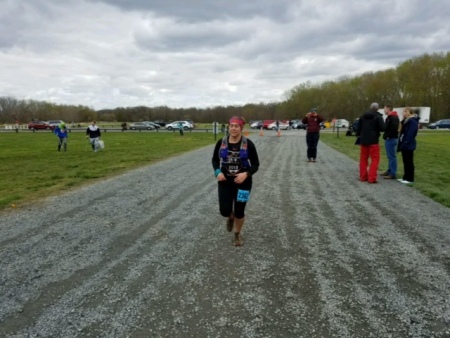 I did not have any chaffing or blisters. That’s pretty good since it rained a few times and my feet were soaked for basically the entire race. Thank goodness for Vaseline!

This is a little thing, but my Fitbit broke the week of the race! It was a bummer, because I was looking forward to seeing how many steps I took during a 50K. Customer service has since replaced it with a new one. All the more reason to run another one!

After my race I was pretty sore the next day, but that’s to be expected right? All of those little stabilizer muscles in my core, hips, and ankles were particularly sore from slipping and sliding in the mud for hours on end. However, I found that the more I moved the better I felt. By Wednesday (four days post-race) I pretty much felt back to normal. My recovery from a trail ultra was quicker than my recovery from either of my road marathons has been.

Before the race and during training I quietly worried to myself about being a slower runner. I worried that I didn’t belong out there if I couldn’t run faster. But being out at the North Face race showed me that it’s okay to be slower and still want to accomplish this type of distance. The ultrarunning and trail running community welcomed me with open arms.

I truly feel like I belong and I can’t wait to venture further into this crazy world.

What’s your typical pre-race/pre-long run breakfast?
Do you train by heart rate?
Roads or trails?

Wednesday things with QE2.
Ended up with 60 miles at the #lakeridgeendurancerun 24 hour race this weekend. I fought some serious mental battles early on in the race and finally flipped the switch about 19 hours in. Thankful for sharing some miles with friends and for my husband crewing me and volunteering overnight. Thanks @trailadventurerunning for another great event!! #trailrunning #ultrarunning
Preparing for the #lakeridgeendurancerun 24 hour this weekend! Hope I have enough snacks 😊 #trailrunning #ultrarunning #LRER
A Labor Day tradition. Let’s do fall!
My little sister @wray_ofsunshine got married yesterday 🥰. She looked so gorgeous and we all had such a great time celebrating her and @ryanmichaeldurham. Congratulations and best wishes to you both. We love you! 💜
Happy 9th Birthday, Scout! 🥳 My how time flies. #bloodhoundsofinstagram