Wow, it’s been awhile since I wrote one of these. The last time I pinned on a bib to run a race was October 2015, so I was excited about running the Blacksburg Classic 10 Miler this past Saturday. The race has a hometown feel for me, even though I don’t live in Blacksburg, because I went to school at Virginia Tech. This year was my third year running the Classic and it ended up being my slowest and toughest Classic race yet. But a big part of that was due to me turning it into a 20 mile long run.

I ran what felt like an easy pace as I made my way over to the Virginia Tech campus. It was a gorgeous day (upper 50’s, party cloudy), and being on campus gave me an extra pep in my step. I ended up running about a minute per mile faster than any of my runs this entire training cycle. This definitely came back to bite me later. But at the time I was feeling awesome.

I arrived back at race headquarters about 20 minutes before the race start. This was maybe a bit too much time, but the restrooms are kind of limited at this race and I wanted to make sure I had time for one more break before the race. I then headed back to my car and put on a dry shirt and refilled my bottles. At this point there was about 10 minutes until the race start. I started to jog around a bit, but I kept running into people I knew that I wanted to talk to. So I ended up just standing around talking to friends 🙂 Not smart, but enjoyable.

Barry met up with me in the start area as we waited to get going. He had to work earlier in the morning and wasn’t sure if he would make it on time, so I was really glad he did. He also let me know he would be running the race with me, which was another nice surprise! The race ended up starting about 5 to 10 minutes late, so I had nearly 30 minutes between my first 8.3 miles and the race. Not ideal, but finally we were off and running!

Early on I was feeling fatigued. I tried to forget the fact that I had run 8 miles beforehand and just pretend I was running the race like normal. I felt okay on flats and downhills, but as soon as we hit any kind of incline I was feeling really gassed. I couldn’t figure out why I was feeling so awful. On the whole, I hadn’t even run more than 10 miles yet for the day. So why was I so tired?

The first four miles of the race looped through neighborhood roads with a short stint on the Huckleberry trail. By mile 4 we were back on the Huckleberry trail, where we would be for pretty much the rest of the race. I was taking a lot of short, frequent walk breaks, but Barry stuck right with me. As we approached mile 5 of the race (13 miles total for the day) I got pretty cranky and was not a nice person to be around. I was feeling pretty frustrated with myself. Running through this mud between miles 5 and 6 was fun, though!

After the muddy section, we got into the hills on the course. From miles 5.5 through 9 we covered a lot of rolling hills. At this point I was walking up all of the hills. Just past mile 6 of the race (14 total) my quads started doing that rippling pre-cramp thing and by mile 16 my right quad was going into full on cramps. I had to stop several times to try and stretch it. When it would cramp I tried to walk through it, but anyone who has had cramps during a run knows you can’t walk it off. And that stinks. 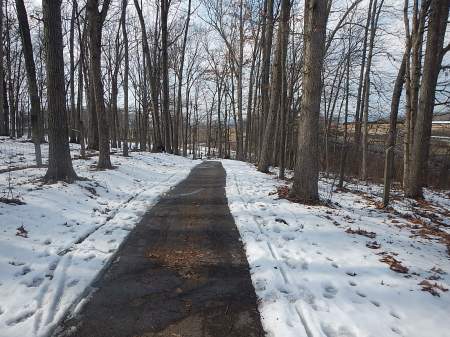 Physically I was tired, and the cramps didn’t help, but I think a big part of my struggles on Saturday were mental. I just could not stop thinking about the fact that even after finishing the race I still wouldn’t be done. I need to work on just staying present in the current mile. Also, when I start getting tired I need embrace the fatigue and accept it as part of the process, instead of letting it defeat me.

Barry and I continued to our work way through the final two miles of the race. A little after mile 9, as we came up the final long hill, a bunch of volunteers were cheering us on and saying less than a mile to go. Barry shouted to them that I was running a 20 mile long run, and they whooped and cheered even louder. That was fun. Finally, I crossed the finish line with a time of 2:13:06, which is more than 30 minutes slower than my past 10 mile times. But I usually don’t have 8 miles on my legs beforehand. My right quad kept seizing up, so I popped into the school gym in search of something salty. All I could find was a pretzel stick, so I took that with me and headed back out to finish my final 1.7 miles.

I finished my run solo, and those final miles felt long. During mile 19 the muscle on the front of my left shin joined the cramping party, along with both of my quads. I do have some mile 19 humor for you, though. As I was running on the sidewalk on my way back to race headquarters, a bus drove by. The gust of wind caused my shorts to flap and for the final mile all I could think was the phrase “whatever blows your dress up, darlin’.” It’s a phrase I’ve heard before, probably most recently while watching Sweet Home Alabama. Welcome to the randomness that is my brain after 4 hours of running 🙂

Also, because I already struggle with basic math which only gets worse with running, I ended up hitting 20 miles before actually making it back to the school. Some might have stopped, but I chose to keep running and ended the day with 20.11 miles. Done. This was a tough one, and I must say I’m looking forward to getting back on the trails for my long runs 🙂

That was basically a novel, so we’ll call this the epilogue:

I can’t help but wonder what kind of day I would have had if I hadn’t been running 20 miles. If I had just been doing the 10 Miler, I would have finished in under 1:50 and would have had a lot more fun during the actual race. But that wasn’t the point on Saturday. The point was to run 20 miles, which I did, and incorporate the Classic since it had been rescheduled from the weekend before. As far as why it was such a rough day for me and why I had muscle cramps I don’t know. I think I was taking in enough fuel (roughly 200 calories per hour) and electrolytes (Tailwind), but clearly something was off. I think running this whole run on concrete and pavement probably affected me. Although I don’t want to give myself an easy out based on the running surface. It can’t have that much effect, can it?

Lastly, I don’t regret running the race. But I do wonder how my day would have gone had I just been running a ‘normal’ 20 miler. It would have gotten tough at some point, but surely it would have been better than Saturday’s broken up run. I’ll never know for sure, but I’ve got plenty of long runs ahead of me to work out my nutrition and mental game strategy.

What funny/random stuff has gone through your heard during a long run or workout?
What are your mental toughness tricks?

Twenty miles done ✅ Training is ramping up as September draws closer. See you soon, @yetitrailrunners!
Handsome Elvis
Another bear sighting on my run this morning - that’s the second one this month. This guy was swimming across the river in Hiwassee! #trailrunning #ultratraining
@the_adventure_jogger saw this on my run today… maybe something out of a well-packed Jeff Stafford first aid kit, or maybe something else? Either way, I opted not to pick it up 😂
So you say you want a bloodhound…
Birthday run/hike at Pandapas. 🥳😊#trailrunning