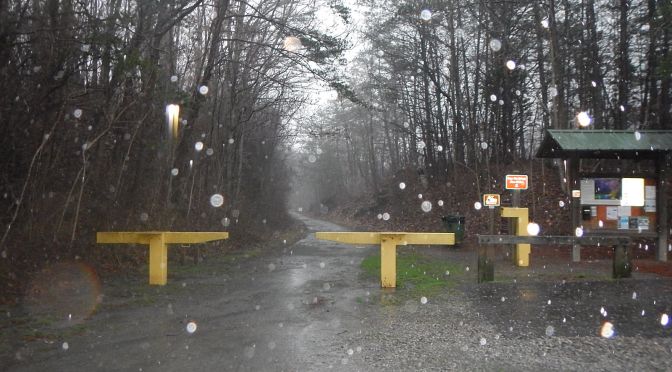 Now that the cat’s out of the bag, I have renamed this weekly workout recap “TNF ECS 50K Training.” That sounds like some kind of code, but it stands for The North Face Endurance Challenge Series 50K, which I plan to run on April 9 as my first ultra!

My first week of training was not great. It started out alright, but then it went all to crap over the weekend. But I decided to think about it like this: training is kind of like a Jenga tower. So far I have a good base, from six weeks of base training, for my tower. If I missed my first long run the first week of training it’s really like just having one piece missing from that tower. In my experience missing that first piece isn’t going to bring the whole tower down. That being said, the long run is kind of important for a long distance race…. so hopefully I run most, if not all, of them from here on out. 🙂

Wednesday – 5 mile hill run, with 7 x hill repeats in the pouring rain. I was worried I was under dressed (in shorts and a light jacket), as I headed over to the trail and it began to pour outside and I watched the temperature dip below 50. Luckily, I wasn’t completely freezing during this run.

I gotta tell ya my picture taking skills were really on par during this run, too. First, I attempted a selfie with my new buff that Barry got me for Christmas and I got this…

An attempt later on in the run yielded more favorable results. 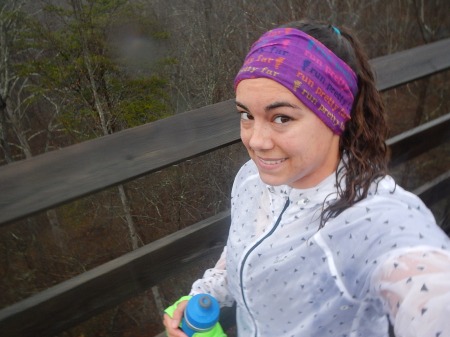 Then there were these gems…

Friday – 6 mile run with Kim. This run was the highlight of my workout week. It had been awhile since Kim and I ran together (Okay… only a little over two weeks. But it felt like a long time!). It was fun to catch up and I felt great the whole run.

Then as the day went on, I felt more and more tired and by the time I went to bed I had a bad headache.

Saturday – I had a 13 mile trail run scheduled for today, but I work up feeling awful. I’m not sure if I had allergies or a head cold going on (possibly from that cold, wet run on Wednesday). But I was exhausted all day and couldn’t get more than a foot from a tissue box. So I took a rest day in the hopes of being able to do my long run Sunday. I skipped dinner, went to bed at 7 PM, and slept over 12 hours.

Sunday – I woke up feeling a bit better, but still not back to normal. I still had unrealistic hopes of doing my long run, and Barry and I headed out mid-afternoon to the state park to give it a go. This run was pretty much doomed from the start, though. I had a pounding headache, still felt exhausted, and hadn’t really eaten much since lunch Saturday.

So I ended up doing just 4 miles and deciding I’d had enough. That’s the way it goes sometimes and in the long run (ha) it’s more important to listen to my body at this point. At least it was a pretty day out there. 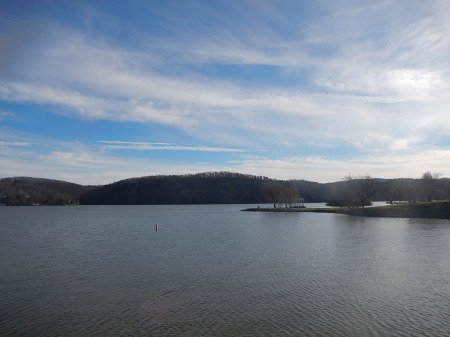 Here’s to a successful long run this weekend!

This weekly training recap is part of the Weekly Wrap linkup, hosted by HoHo Runs and MissSippiPiddlin’.

Be sure to check out their blogs and see who else is linking up! The link up has grown so much and there are so many awesome blogs to check out.

Are you good at taking pictures while running/working out?
Who else is embarking on a training plan for a spring race?

Twenty miles done ✅ Training is ramping up as September draws closer. See you soon, @yetitrailrunners!
Handsome Elvis
Another bear sighting on my run this morning - that’s the second one this month. This guy was swimming across the river in Hiwassee! #trailrunning #ultratraining
@the_adventure_jogger saw this on my run today… maybe something out of a well-packed Jeff Stafford first aid kit, or maybe something else? Either way, I opted not to pick it up 😂
So you say you want a bloodhound…
Birthday run/hike at Pandapas. 🥳😊#trailrunning