This is a long post, even after I split it into two parts, but I wanted to share everything that happened with Hank recently. Definitely a PSA for anyone with large and/or deep-chested dogs! FYI – This is just our experience. I am not a vet and not an expert in any way.

Hank started showing signs of bloat less than an hour after I got home from my Ragnar weekend on Sunday, June 21. It started with him seeming restless and uncomfortable. He didn’t act overly excited, and kept laying down and getting back up, as if he was uncomfortable. After he came inside from his nighttime potty, around 10:30 PM, he began trying to throw up without producing anything (textbook sign of bloat) and then his stomach ballooned to the size of a cantaloupe. Barry yelled that he was bloating and we needed to get to the vet. When a dog bloats, every second counts. Bloat and the resulting stomach torsion are one of the leading causes of death in otherwise healthy dogs, and it happens fast.

I panicked and literally ran in place for nearly a minute before getting my head together, grabbing my purse, and rushing out the door. We left a crying, panicking Scout (our other dog) behind us.

Once in the truck with Hank in the backseat, Barry tore out of the driveway and I frantically contacted the emergency vet and let them know we were on our way. When a dog bloats, they can die within two hours from the onset. I begged the vet for anything we could do, and they said to just get there. It was 35 minutes away.

Five minutes into our trip I climbed in the back to ride with Hank. He was having trouble keeping his balance and was crying, panting, and still trying to throw up. I did my best to steady him while petting him and saying soothing things to him to try and calm him down. I was so scared, though, and the trip up the interstate seemed to take forever. In actuality it took only 25 minutes or so. Five minutes before we made it to the vet Hank laid down, stopped crying, became very weak, and was only holding his eyes about halfway open. I was shaking him and holding his head up, terrified he wouldn’t open his eyes again if they closed.

When we arrived at the vet, Barry rushed him inside and I parked the truck and then followed them in. They diagnosed him with bloat, and tried to pass a tube to his stomach to relieve the pressure/gas. This is the first approach for treating bloat. Unfortunately, Hank’s stomach had twisted (known as gastric dilatation volvulus), so they couldn’t pass the tube. Bloat itself does not kill dogs, but GDV does. When the stomach twists it cuts off blood flow to the stomach lining and can also cut off blood flow to the heart. Even when blood supply is not cut off to the heart, stomach torsion can send the dog into shock. So they got rapid IV fluids going to prevent/treat shock and took him into emergency surgery.

During the surgery Hank’s spleen started to bleed. In addition to untwisting his stomach and tacking it to his abdominal wall (to keep it from flipping again) they also had to perform a splenectomy. We headed home during the surgery because it was going to be awhile and he was going to have to stay at the vet anyway. We tried to get some sleep, but I couldn’t sleep until they finally called around 3 AM to let us know he was out of surgery and doing well. The blood flow had been cut off to his stomach, but once they got it untwisted it pinked back up. Apparently Hank was still charming people, even in his pained and medicated state, because the vet called him a ‘stellar’ patient.

Over the next 24 hours the main concern was that Hank could have heart arrhythmias, due to the stress of acute bloat and the interruption in blood flow in his body. Luckily he never showed any signs of this. He remained at the vet until Tuesday evening for observation. Scout was so mopey while he was gone. She wouldn’t eat and just walked around the house crying.

Barry brought Hank home about 48 hours after his surgery. It was such a relief to have him home, but in some ways it was also scarier for me. I was afraid he could take a bad turn, and afraid of his large abdominal incision coming open.

Hank was extremely tired and mostly slept at first. He was on antibiotics and pain medication, and was restricted to leash walks with no running or jumping (good thing he doesn’t have to jump to get on the couch). This wasn’t a challenge since he was so weak and worn out. He was also prescribed to eat small meals every 4 hours to get his GI system going again. 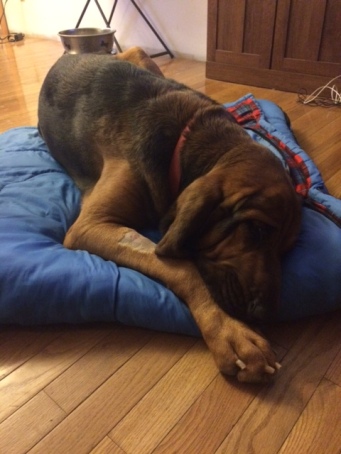 Scout was so happy once Hank was home, though, and she couldn’t take her eyes off of him. Hank definitely had the worse end of the bargain – emergency surgery and all – but this whole ordeal was really hard on Scout, too. 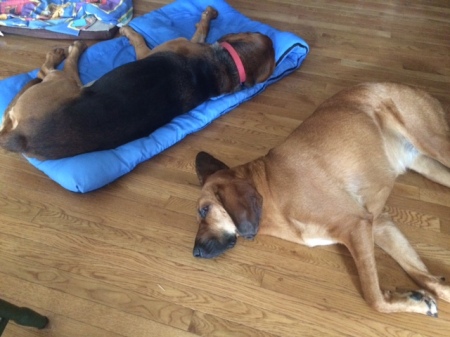 This is a pretty good place to stop for part one. I’ll pick back up with how he did in the days following his return home, and how he has been doing since.

Have you ever had a pet that required emergency surgery?