We had some great spring weather this weekend! I hope that we’re finally done with winter. On Saturday morning I got out to enjoy the weather for a bit on a long run with Kim. It was in the upper 40’s and partly cloudy, and we both kept commenting multiple times on what a nice day it was.

We got in 8 miles, and overall I felt pretty good on this run. I had a few high’s and low’s during it, and my calves/ankles were giving me some trouble because they were really tight. But other than that it was one of the better runs I’ve had in awhile.

On Saturday afternoon I headed up to Blacksburg to spend time with my best friend, who was in town for the weekend. We hung out for awhile and then decided to go see Insurgent, the second movie in the Divergent series. We had some extra time until the movie, so we went shopping at the mall for a bit. I’ve been looking for Toms/Tom-style shoes for awhile now. I ended up finding a pair that were slightly different than what I thought I was looking for. It’s hard to tell, but they’re a bit sparkly but not too much!

They sparkled a lot on the way into the movie theater, with the floor lighting they have, and I’m probably lucky I didn’t walk into anyone. I was too busy staring down at my feet! But we made it into the theater without any catastrophes. The movie itself was pretty good! 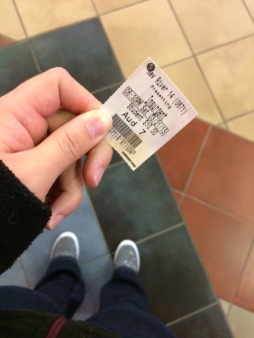 It was close to 9 PM when the movie ended, and neither of us had eaten since breakfast so we were both starving. We ended up grabbing some Subway sandwiches and heading back to our friend’s house where my BFF was staying for the weekend. I hung out for awhile and stayed up hours past my bedtime before heading home for the night.

Yesterday I decided to skip the mid-distance trail run I had planned. My calves and ankles were still so tight, and had been that way since last Wednesday. I’ll be running solo for my long run this coming weekend, so I’ll hit the trails then. Instead of running, I spent the morning doing laundry and some other stuff around the house and made a grocery store run.

In the afternoon, I headed back up to Blacksburg again to hang out with Laura for awhile until she headed home. Then I came home and made dinner with Barry. We had baked pork chops, and I made half of them with Ranch dressing (I saw a Hidden Valley commercial on TV). I made the other half with some Italian bread crumbs, the way I normally do. The Ranch ones were alright, but I think I’ll stick to the Italian bread crumb ones in the future.

How was your weather this weekend? They’re calling for chance of snow this coming weekend. Boo!
Have you seen Insurgent or read the Divergent book series?
Has anyone else tried the Ranch baked pork chops? What did you think?