This past Saturday I ran the second race of the Roanoke Non-Ultra Trail Series (RNUTS). My training has been really spotty lately, and the race reflected that. It would have been a tough race for me without snow on the trail, but there was that, too.

I ended up convincing Barry to run the race, too, so we headed up to Roanoke together on Saturday morning. The road into the park was really icy, and they were directing two wheel drive vehicles to park in a nearby church parking lot. Our truck was able to handle the road just fine, though.

We arrived about 20 minutes before the start of the race. Once there, I went and picked up my race stuff and Barry got registered. We caught the tail end of the pre-race meeting and then made the mass exodus down to the start area. 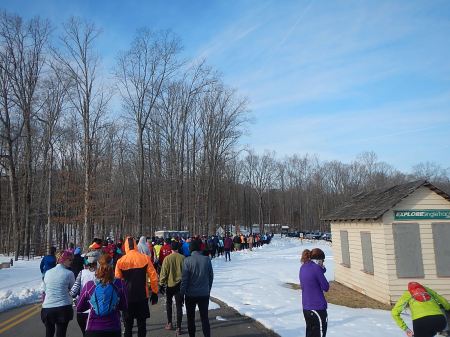 We made our way through the slushy snow and milled around bit waiting for the start. The snow in this area was ankle deep and pretty slippery to walk in. I tried not to think about what was to come.

After a short wait, we were off! The 10K started 10 minutes before the 5K, to keep the single track from getting too crowded. So at the sound of the first starting gun, the 10K’ers were off scrambling up the little hill we had just walked/stumbled down and back out onto the icy road we had drive in on. 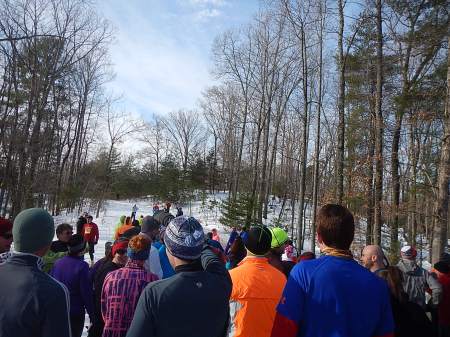 We weren’t on the road for more than a quarter of a mile before heading into the woods. That’s where things immediately got tough. The snow was probably around ankle deep, or a bit more, and it was slick. My feet kept sliding around, causing me to stumble, despite the Snow Trax (like Yak Trax) I had strapped on my shoes. 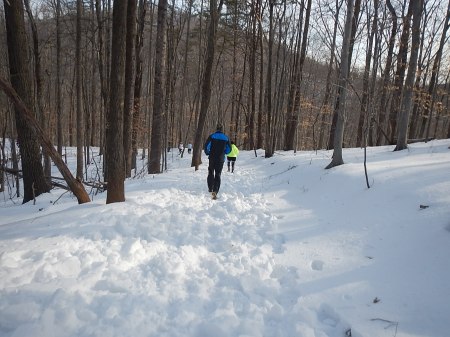 The snow definitely made for some really tough running conditions. It felt like running through deep sand, except that the sand was also really slick and my feet were wet and freezing. However, I was surprised when my watch hit 1 mile. I thought we couldn’t be more than half a mile in. I thought to myself “maybe I can do it, after all.” 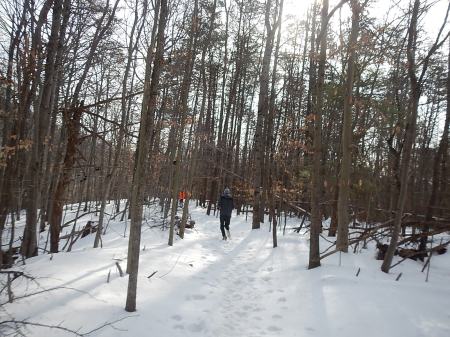 Unfortunately, things started to go downhill very quickly after that. There were a lot more areas of deep snow (I couldn’t take any pictures, because I was too busy trying to stay upright). My Snow Trax on my shoes also started to slide off continually. The heel part would slide up to the back of my shoes and the front part would slide up over the top of my toes. I started having to stop several times to adjust them, which added to my frustration.

About halfway through the second mile I started to become very fatigued. I was frustrated because I couldn’t run the way I wanted to and my Snow Trax kept sliding to the tops of my shoes. I had to resort to a lot of hiking, because the snow felt too difficult to run through. Then the 5K’ers started to catch up to me and I was constantly moving to the side of the trail or stepping off of the trail and stopping to allow them to pass.

During mile 2 a lot of thoughts started to creep in about dropping down to the 5K. I knew we would be running by the 5K finish at the halfway point, which would allow me to drop midrace easily. This isn’t something I have ever done before, and I didn’t consider it lightly. But I had a good 30 minutes to consider it, and I ended up deciding dropping down to the 5K was the right decision. Again, not a decision I made lightly. I knew I could finish the full 10K, but to what benefit? Based on my current level of fitness, lack of training, and the tough course conditions, it was the right decision.

So when I arrived at the 5K/10K split, I headed for the finish. I won’t lie, it was a bummer. It’s not what I set out to do that day. But what would have been the point of hiking/running the last 3 miles of the race? After crossing the finish line, I found the race director and time keeper and explained what I had done. They said no problem, pulled of the tag on my bib, and added me to the 5K’ers (they added 10 minutes to my time, to account for the staggered start). I hung out at the finish line, knowing Barry wouldn’t be too far from finishing. Sure enough, I waited less than 20 minutes for Barry to arrive.

I caught up with Barry and told him what had happened. I was relieved when he said he also thought I made the right decision. That made me feel a bit better. We hung out for a bit at the finish line before heading over to the Visitor’s Center (race headquarters) to warm up and get some post race food. The post race food was up to Mountain Junkies usual standards.

All in all, it was definitely a tough day for racing. Ironically, I somehow ended up placing second in my age group. I didn’t realize this, though, so I didn’t go out when they were doing the 5K awards. I’ll have to pick up my medal from the race directors at some point. The next race of the series is in two weeks. There’s a 5 mile and 10 mile option, and I’m currently signed up for the 10 miler. Hopefully the trail conditions will improve by then. I’m finally feeling healthy so I’m looking forward to getting back to regular training. Hopefully I’ll be ready on March 14!

Who else raced this past weekend?
Have you ever ran or hiked in deep snow? It’s tough!