Wow, how is it the last day of April already!? We are one-third of the way through 2014. I feel like running a lot of races seems to make the time fly. This past Saturday I ran my fifth race of the year – the Blue Ridge Half Marathon in Roanoke. I’ve got lots of pictures for you today.

This was my third year running Blue Ridge. The first year was in 2012, and Mill Mountain did me in. The second year, I was much more prepared for the course and despite additional elevation gain from 2012 I dropped 22 minutes on my time. This year they added an extra mountain. I wasn’t sure how that would affect me, and I ended up finishing in 2:40:49. Faster than the first year but slower than last year. But check out this elevation profile. Crazy!

I headed up to Roanoke in the morning with my dad and Barry. Barry was signed up to run the full marathon, which has 3 significant climbs up 3 mountains in addition to plenty of hills around town. We arrived about an hour prior to the start and easily parked in the garage closest to the start and finish area. Of course the first thing we did was make our way over to the porta potty line. It looked long, but only took 5-10 minutes to get through.

I also met up with my running buddy, Kim, who was running the 10K, and with Anita, Wendy, Glenda, and Kim from the Sole Sisters in Wytheville. I have run many races with Anita and Glenda, including last year’s Blue Ridge.

Then it was time to head up to the starting area! This year they had corrals set up, and runners placed themselves based on expected pace. It seemed like that helped with the larger field. But I’ve never really had an issue with crowds at Blue Ridge because the climb up the mountain is during the first 3 miles, and the majority of people are taking walk breaks periodically.

I kissed Barry goodbye and wished him well, and then headed towards the back corral with Kim. We listened to the National Anthem and then waited about 2 minutes for the race to start. 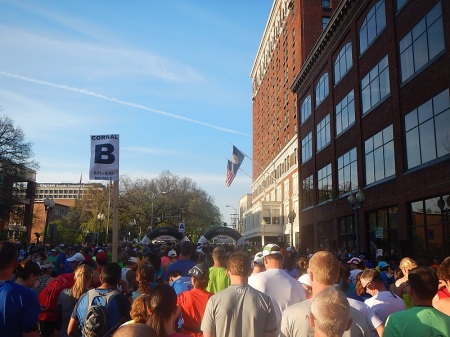 At 7:35 on the dot they started the race and we were on our way! I think it took me less than a minute to get across the start line. I love small races. 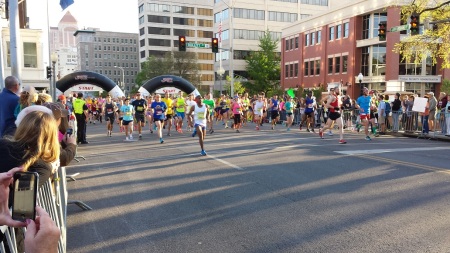 Shortly after crossing the start line, I saw my dad, who came down to visit this weekend and spectate the race. It was sunny and in the low 50’s, but would warm up to nearly 70 by the time I finished and 75 degrees when Barry finished. Pretty hot for April!

Kim and I ran together for most of the first mile before parting ways. The race starts in downtown Roanoke and crosses a larger bridge on Walnut Avenue. As you cross the bridge you get a nice view of the Roanoke Star and Mill Mountain, which you will soon be ascending. You can see the star on the right at the top of the mountain in the below picture.

After mile 1, things get serious and you get down to the task of climbing Mill Mountain. This year I felt really good early on in the race and was able to run until mile 2 before taking my first walk break.

From there I alternated between running and walking until I made it to the top of Mill Mountain. There are some pretty views on the way up the mountain, but the sunshine made them hard to capture.

Around mile 3.5 we finally arrived at the top of Mill Mountain. First, you run behind the Roanoke Star.

Then you take a short gravel path to the front of the star. A little trail action for my Hokas.

There is an overlook at the star where you can view downtown Roanoke and the surrounding area. Not too long ago, we were down there on the valley floor preparing to start the race!

In years past I have always gotten very nauseous and even gotten sick on the way down Mill Mountain. It’s a pretty harsh descent, and I think the water sloshing around in my stomach has caused it to get upset. So this year I decided to not take in any water until I got off the mountain, between miles 5 and 6. This worked out pretty well, and I killed it down the mountain, averaging 8:30/mile pace.

Before I knew it I was back on the valley floor and heading for the greenway bike path. I saw my dad around this point.

As we entered the greenway and hit a few gentle rolling hills, I realized what I had done by blowing down Mill Mountain: completely worn out my quads. Uh, oh. I tried to push it to the back of my mind as I took in some water and my first gel (a Vanilla Honey Stinger gel). There were plenty of good signs to distract me, including each mile marker. The bottom right is what the volunteer’s shirts said this year. 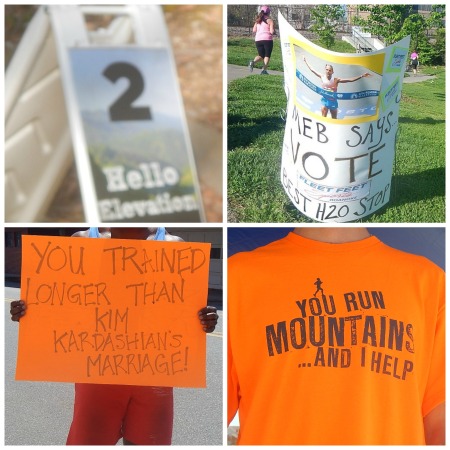 I knew we still had Peakwood to climb, although I didn’t know quite what to expect with that.There were a few challenging hills as we ran along, and my pace suffered.

Then we hung a left onto Peakwood shortly before mile 8 and things got serious. Again. 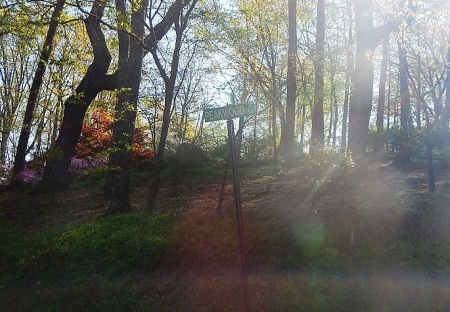 I don’t know how to describe Peakwood other than relentless climbing. At times it was just so steep, and I was more hiking than walking or running. 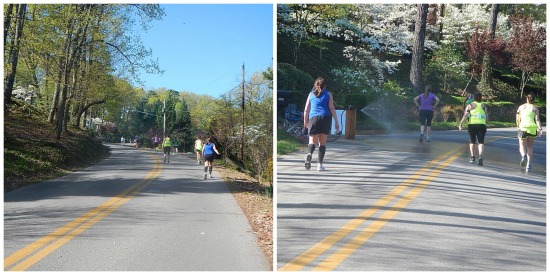 The people of Peakwood were awesome, though (see above sprinkler set up). And the houses? Amazing.

We continued climbing, and passed by an aid station one of the Peakwood residents had set up. She had orange slices out and that sounded good so I grabbed one and ate it. Then I remembered I’m not supposed to eat anything citrus, acidic, or spicy for the next 10-14 days from the surgery I had last Tuesday. Oops. As you climb up Peakwood (which I should let you know has been nicknamed ‘Pukewood’) you get a brief respite before it gets. even. steeper. Hills never capture in pictures, but I tried. 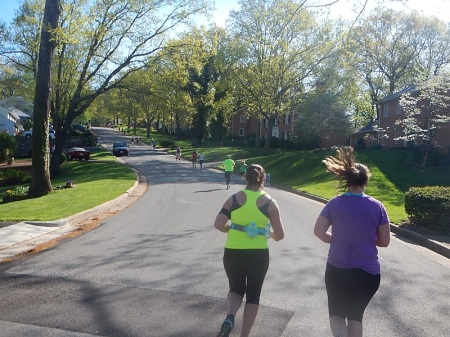 The climb up Peakwood was hands down, twice as difficult as the climb up Mill Mountain. Part of it is because it is later in the race (full marathoners reach this climb at mile 17!), but the other part is it was definitely more relentless. But the climb is worth it because… 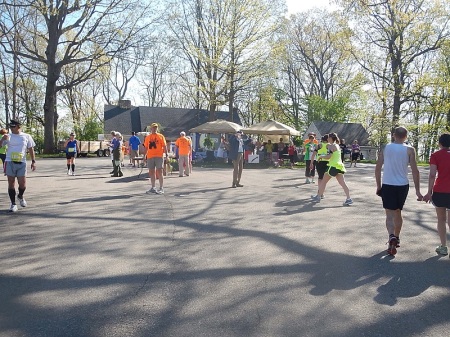 There is a party at the top! Complete with champagne to toast the mountain. Yea, there was a lot of this going on up there:

But I did not partake, in the interest of meeting my no-puke goal. You do a small loop at the top around the party, and then head back down for another quad busting descent.

I spent the entire way down Peakwood just praying I would trip over my own feet and face plant on the pavement. Luckily my legs held up and I did not trip, and made it down mountain number two unscathed. From there we ran around on the valley floor, and up plenty more hills. I think I heard “this is the last hill” at least eight times during the final 3 miles. 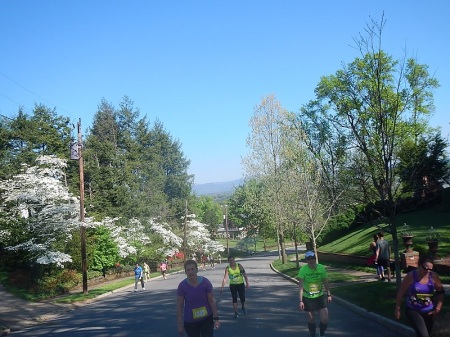 I had to take more walk breaks in the final 5K than I would have liked, but I never had a moment during the race where I questioned signing up for the race. Despite the challenge, I was still enjoying myself. I was so tired, though! At last, we turned on Jefferson with just over a mile to go. But there were 3 mean bridges to run up and over. Ugh. 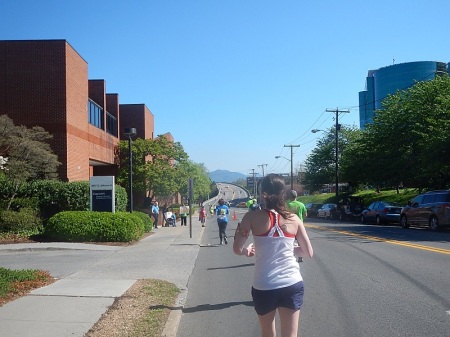 Finally we reached the last “last hill” and then it was a gentle downhill to the finish! I was thinking I could come in under 2:40, but I crossed the line in 2:40:49. Not too shabby for me, with all the Sherpa-ing I did. As I crossed the finish line, I high fived the race director. He stands there all day and welcomes every runner home. So cool!

Just after I crossed the finish line, I met up with Anita and Glenda. We had yo-yo’ed back and forth throughout the race, but were never really on the same run/walk schedule. They finished about a minute ahead of me or so.

I made a quick loop through the food area and grabbed a quarter of a bagel, half a banana, two orange slices (forgot about the citrus restriction again!) and a bottle of water. Then I met up with my dad and we headed back out to position ourselves on the marathon course at mile 22 to cheer for Barry. After a little bit, he came through fighting, but looking strong and determined.

The final part of the marathon did a small loop before heading to the finish, about 4 blocks down from where we saw Barry go by at mile 22. So dad and I cut down to the final straight away to the finish and awaited Barry’s return. He came through and we cheered him on to the finish, as he crossed the line in 4:53. He was hoping to run sub-5, and he did it!

We hung out in a grassy area near the finish line for a bit as Barry recovered. Then we headed over to the finish line celebration area to partake in some free beverages.

The half marathon medal was similar to last year’s, but I like it. I love the bright green shirt the half got this year (and I like that they had different colored shirts for each race distance). A neat twist this year on the full marathon medal is that the medal itself comes off and doubles as a belt buckle. How cool is that? 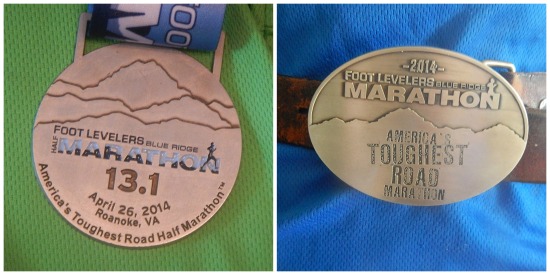 The Blue Ridge Marathon is America’s Toughest Road Marathon. With the addition of Peakwood this year, runners completing the half marathon had the honor of running what is now America’s Toughest Road Half Marathon. I have run fourteen half marathons over the past seven years, and I definitely agree that this year’s Blue Ridge was the toughest road half that I have run. The trail half I ran in March was a bit more difficult, but only because of the snow and ice. Otherwise, I think the 2014 Blue Ridge Half would be the toughest half I have completed period. But you know what? I’m already ready to go back in 2015 and run it again.

What is the toughest race you have ever run? What makes it the toughest?
If you’ve run a race multiple times, what keeps you coming back?

Take me up. To the top. Of a mountain high. 17 miles / 3400 ft of gain. Getting ready for #easterndivide50k #trailrunning #ultrarunning
For the records, it’s really difficult to clean egg yolks off of a concrete floor. 😕
These things are not nice. #trailrunning #ow
The bridge messages are getting a little more ominous these days. #trailrunning
Saturday’s are for Joplin! 🎶💜
Hiking with my friends. 😊 #WildMountainChickens