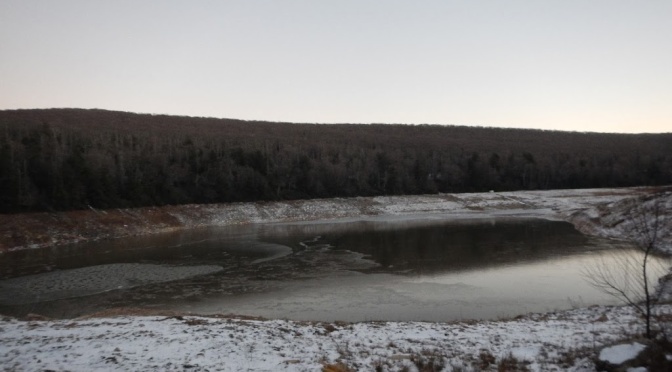 Late Saturday afternoon, Barry and I headed up to Mountain Lake for some trail running. Mountain Lake has the highest lake elevation east of the Mississippi, at nearly 4,000 feet. The water level at the lake was bit low, due to less rainfall this season. 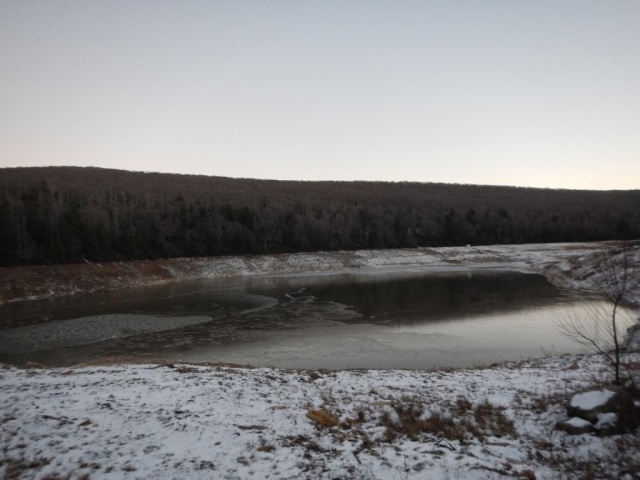 When we first arrived at Mountain Lake, we drove by the Mountain Lake Lodge, which was built in 1930 using stone quarried from the lake property.

The lodge and surrounding cabins may look familiar to you if you’ve ever seen Dirty Dancing. Mountain Lake happens to be where that movie was filmed.

When we first arrived, we tried to check in at the Mountain Lake Outfitters to obtain a pass. It was very odd. There were footprints going to and from the building in the snow and a few vehicles in the parking lot, the building was unlocked and the lights were on, and there were footprints in the dust on the floors inside the building. But there was no one to be found. I helped myself to a Mountain Lake brochure with a map and we headed to the trailhead parking area, since we only had about an hour until sunset. We set off down a snowy trail.

This was my first time running trails in the snow, and I quickly found how much of a challenge the snow can add. The trails we ran were pretty much either going up or going down the entire time, and I struggled on both due to slipping and sliding. Running uphill was especially challenging because my feet kept slipping out from under me.

I thought Mountain Lake was a really pretty, albeit very challenging, place to run. Due to the elevation, the snow that’s on the ground now will stay there until the big thaw this spring. Most likely there will be more snow accumulation before then. 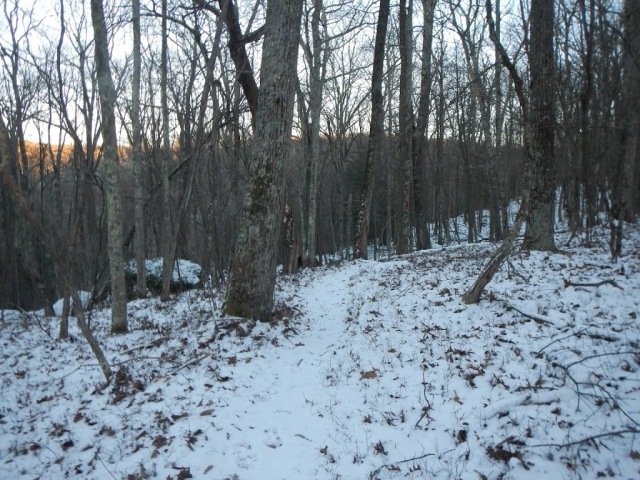 I managed to stay upright during the entire run, even with the added difficulty with the snow. I did slide several times and rolled my ankle pretty bad towards the end of our run. But it’s feeling fine now. I’m hoping trail running is going to strengthen the muscles and ligaments in my ankles and I’m hoping that happens before I break one of them.

Mountain Lake is definitely somewhere that I’d like to run again. They’re supposed to have around 22 miles of hiking trails on the property, so there’s plenty more to explore. Next time we will have to get there earlier in the day to allow more time for a run.

Although I’m not sure if that next time will be soon. I may wait until the spring. These trails were beautiful in the snow, and I have a feeling they’ll be even more breathtaking once the snow melts away and the green comes back.

Have you seen Dirty Dancing? Who wants to come to Mountain Lake with me to run trails and see the backdrop for the movie up close?

Trail runners: Do you prefer trail running in the snow or in the green?

Any tips for running trails in the snow?