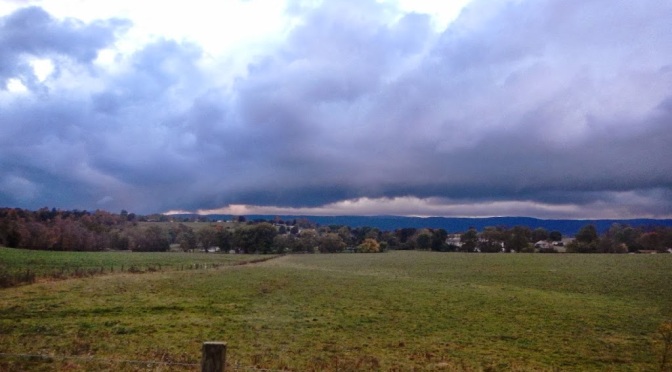 Last night I was able to get out for my 6 mile run as planned. My shin continued to feel good all day during work, so after work Barry and I headed out for a run on the roads around our house. It had been a little while since Barry and I ran together (not counting his biking alongside me while I ran last weekend), so I was excited he wanted to run with me. My calves were on fire within the first 15 minutes of this run, but they often do that after I’ve done a lot of foam rolling. Around mile 4, I stopped and stretched them while Barry stopped for a bathroom break at soccer field we were running past.

It had rained off and on during the day, but didn’t rain during our run. The skies were pretty threatening, though.
Towards the end of our run, the sky turned nearly black and the wind picked up a lot. There were people out on the porch at one of the houses we ran past and they yelled “Hurry!!!” I guess the threatening sky combined with the surprise spectators helped me get into gear, because we ended up running the 6 miles in under an hour on a hilly route, and it ended up being a progression run.
It felt good to run a bit faster than I have been lately. Marathon training is really messing with my normal pace. In my pre-marathon training days my easy runs were often between 9:40-9:50/mile pace. But that was mainly because my easy runs took place during the week and were usually no longer than 4 or 5 miles.
Marathon training has me doing longer runs during the week, which means I haven’t seen an overall average pace under 10 minutes per mile probably since July. I knew if I was going to survive training and arrive at the start line on race day healthy, I had to slow down my pace. It worries me that I have lost fitness, although I think my Yasso 800s track workouts have helped a bit with that. But I also know that I have greatly increased my endurance. I guess for me, for now, that’s the trade off.

—————————————————
It looks like the government shutdown is over, for now. Hopefully we don’t go through this again in January. There were so many people affected by the shutdown, and at one point it looked like nearly 30,000 runners were going to be affected with the potential cancellation of the Marine Corps Marathon. I’m sure other races were affected.

One in particular that I know of was the Grindstone 100, which was set to take place through the George Washington National Forest in VA starting on October 4. Imagine being trained up to run 100 miles and then having the race canceled the week beforehand. I came across this interesting article about a group of ultra runners from the Richmond area who decided to make their own ultra. Spoiler alert: no, they didn’t go out and run 100 miles. But they did each run 30+ miles as a training run for the next race in the “Beast Series.” Their way of sticking it to the man!

Have you found that marathon training slowed down your normal running paces?
What kind of weather have you been having the past few days?

It has been gray and drizzly here since last week.
What would you do if you were trained to run 100 miles and the race got canceled in the days leading up to it?

16 thoughts on “Marathon training is messing with my paces”