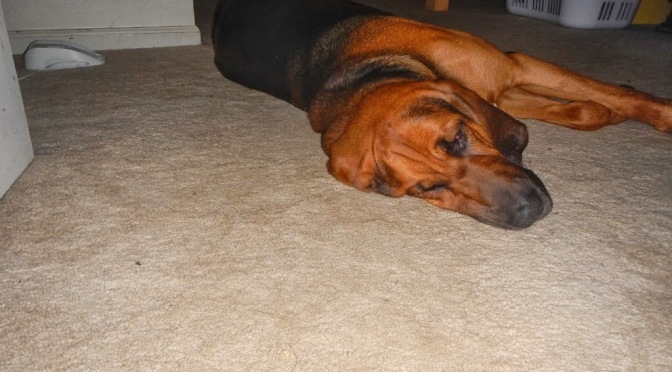 I got an extra day off this weekend for the Columbus Day holiday! Thanks for showing up here in 1492 Mr. Columbus! Much appreciated.

I started my bonus day off of work with a low key morning, involving coffee and pancakes. Then I finished up some laundry and oversaw Barry’s work on a project in our master bathroom (more on that in a minute). Around noon I settled in to finally watch Les Miserables, which had come in the mail via Netflix.

I would say Hank and Scout watched it with me, but they actually slept the entire movie. We took them with us on errands yesterday, and it totally wore them out. First we spent about 3 hours at a friend’s house, where we were dropping off some chicken litter for their garden. We hung out for awhile and took the dogs for a walk around their 5 acre property. That was enough to wear Hank and Scout out, but we still had two more errands to run. From our friends house, we headed over to Tractor Supply to pick up some chicken feed. Then we went to Home Depot to shop for bathroom vanities. Scout actually laid down on the floor in Home Depot and went to sleep while I shopped. Hank, on the other hand, made friends with nearly everyone in the store. He’s such a people dog.
﻿

We did find a bathroom vanity (this is leading towards Barry’s project), counter top, and faucet and we loaded up the truck and headed home where Hank and Scout crashed. It will probably take them a week to recover.
﻿

This morning Barry got to work replacing our master bathroom vanity. Earlier this week I received a text message with the following picture from him:

This came with the message “so I was thinking we could get you a new sink and counter for your bath.” I guess so, since the old one is gone! It was a really nice surprise, and we had been wanting to replace the master bath vanity. The reason there’s carpeting is because the vanity part is in the bedroom (partitioned from the actual master bedroom area) and the toilet and tub/shower are in an enclosed tiled bathroom area. So that’s why we went shopping for a new vanity, and Barry had a project to do this morning.
He got most of it done this morning before heading to work, and then finished the rest this evening. I’m really happy with how it turned out, and I think it looks much better than the older vanity that was there. I would tell you all about the process of installing a new vanity, but that’s not really my style. And by that I mean I really didn’t have much to do with it, so I don’t know what the steps are. I do know that I never want to install a faucet again.
The before (we replaced the mirror and light fixture when we moved in):
The after:
I don’t know why the wood looks like it has spots on it, because it doesn’t. We have a few finishing touches to do, like putting the baseboards back on. I am also planning on changing the hardware on the drawers and cabinet to silver, to tie in with the faucet and hand towel racks.

﻿
Since this is a primarily running blog, I should probably also tell you about my mid-afternoon run. Since I had the day off, I used the extra time to head up to Radford for a 6 mile run. I started out in Bisset Park, but headed through a tunnel to Wildwood Park to explore some new trails. 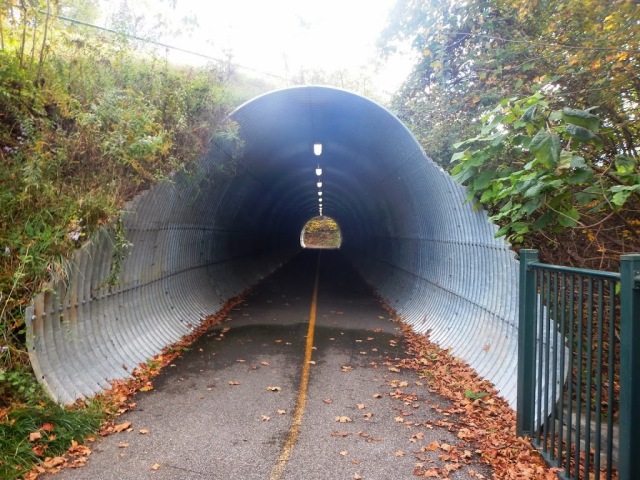 The trail was a standard, paved trail through the woods. Unfortunately, there ended up only being about 2 miles of trails in Wildwood Park, so I finished my run at Bisset Park.
I did see a bunch of hiking trails that branched off of the paved trail in Wildwood Park. Those may be fun to explore in the future. I will definitely wait until the after the marathon, though. I have a hard enough time running on paved and crushed gravel trails without rolling my ankles. We don’t need to add roots, rocks, and uneven footing to the mix.
My legs felt a bit tired today, but overall pretty good. Barry had reminded me not to get discouraged if my shorter runs were tough this week and to remember that I was coming off of a 44 mile week (the most I’ve ever run in a week). I’ve got a few spots in the upper parts of my quads that are particularly bothersome, but not to the point that it hurt to run. Oh and tonight’s sunset was really pretty.

That is all. Congrats if you made it through this entire post. It probably should have been broken up into two or three posts.
Did you have the day off of work/school for Columbus Day? If so, what did you do on your extra day off?
Have you seen Les Miserables? What did you think?
I was a bit disappointed. Honestly, I got a bit bored during it. Oh, well…
﻿