As you already know, because I don’t talk about anything else (this is a running blog), I’m doing this marathon training thing. After debating between two training plans, I ended up going with one that was in the July 2013 issue of Runner’s World.

In the past I have always used the same format for my training plans which looked like this: 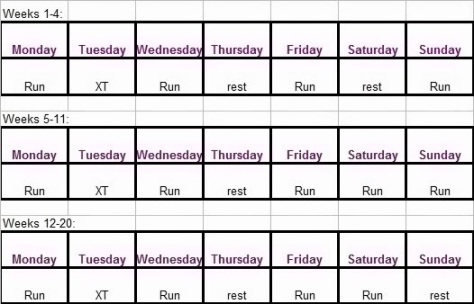 Pretty snazzy illustrations, huh? So far the training has been going just fine. I’m currently in the midst of week 4. Some days it feels kind of weird to be running on a day I used to take a rest day or to cross train on a day that was usually a running day. But I think it’s good to mix things up.

Breaking out of your normal routine can spice things up, while helping you improve your fitness. I’ll be running more miles per week throughout training, which is also new to my usual running routine.

Varying your normal workout routine also keeps your body guessing. Our bodies like routine and like to adapt. By mixing up your normal routine you’re forcing your body to change. At least that’s what Jillian Michaels is always screaming about. I don’t want to plateau and have my workouts become ineffective. It’s also going to prevent boredom.

I have mentioned before that this 20 week training plan is the longest one I have ever followed. I think having a new pattern to follow, along with that pattern changing every few weeks, is going to help break up some of the monotony of training. I also threw in a few races along the way for fun and to help fight getting mentally burned out.

How do you mix up your workout routine?

Do you have a standard format you always use when you’re training for a race?

Do you ever use races as training runs?

The babies are getting bigger! Starting to look like actual hens. They’re about 8-9 weeks old now.
As sung to the tune of the “Tootsee Roll” song. Happy Thanksgiving!! 🦃✌️
The ornaments on the trail make me happy. And so does Pandapas. 😊#trailrunning
It was a great day to see the Hokies play!
#seenonmyrun
The babies moved out of the garage and into the coop with the big girls today. The next month or so will be a “getting to know you” period where everyone can check each other out while still having some separation. At least one hen is a little pissed right now (see video at the end). 😂 #backyardchickens