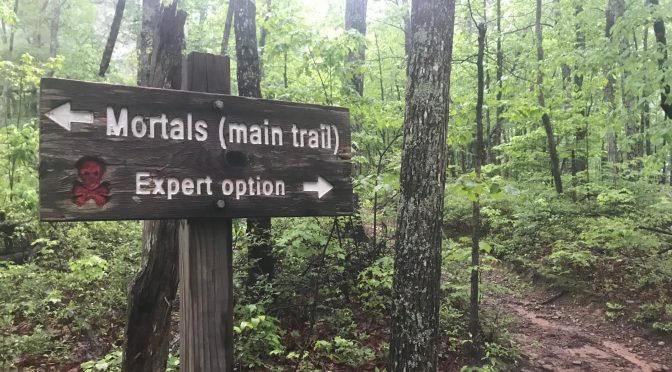 I’m probably starting to sound like a broken record, but this race was yet another one that got canceled due to COVID-19. I was going to defer to next year until my friends Lauren and Lauren reached out asking if I wanted to run the virtual option with them. I’m undertrained and haven’t been doing any climbing that would prepare me for running at the Cove. So of course I wanted to join my friends on a 25K jaunt with over 2,000 feet of gain!

I was talked into starting our run at 6:30 AM. There are very few people whom I will get up at 4 AM for, but my Trail Sisters are on that short list. Plus it’s when the race would normally start, and it’s often hot and humid, so an early start made total sense. The race usually starts and finishes at Loch Haven Lake. But since this is a private resort, our virtual run started and finished at the Timberview parking area which is where we met up. We were blessed with very forgiving weather – 60’s and overcast. The humidity was around 95%, but it didn’t feel oppressive with the lack of heat.

Without the extra mileage from Loch Haven, we started our day with a steep 1.1 mile, 600 foot climb. I guess you could call that easing into things since we were hiking? Along the way, we passed one of my favorite signs along the course. Of course, we took the expert route:

I felt okay going up the climb, although I always start to feel a little nervous and unsure when there’s a big climb at the beginning of a race. But I’ve been working on keeping that in check and I did alright keeping it at bay. It felt good to get to the top and enjoy some easier running on the fire road.

We enjoyed some downhill and some rolling, mostly runnable trails on our way towards the Bennett Springs parking lot. We had a few creek crossings along here and the cold water felt refreshing on my feet. I was enjoying the cool, misty weather, although it made the trails kind of spooky.

Around mile 4.5ish we arrived at the Bennett Springs lot, where Lauren had left her car earlier in the morning to serve as an aid station. She had ice cold water and orange slices for us. After enjoying our treats and topping off on water for the rest of the run, we headed back onto the course and made our way to the Four Gorge Trail.

The Four Gorge Trail is one of my favorite trails to run at Carvins Cove. It is so pretty! It also has my favorite “park ranger” along the trail. Of course, we had to stop for photo ops with him!

From here we plugged along for another mile and a half or so before arriving at the fire road a little past mile 6.5. We regrouped here before tackling the 2.5ish mile climb up Brushy Mountain. I was feeling good, but I knew we had a long climb ahead of us.

As we made our way up the fire road, I noticed a bright orange newt. I love seeing these little guys on the trail – they’re so cute! (Way cuter than that spider I saw during my Historic Half virtual run) After that first one, we started seeing a ton of them. I think they liked the weather conditions. Our entire climb up Brushy became a game of “don’t squish the newt!”

There are usually some pretty views on the way up Brushy, but it was too misty and foggy to see anything. The wet weather made the forest look super green, though!

The higher we got the foggier and spookier it got. After nearly 1,000 feet of climbing we arrived at the top. Again, we regrouped before tackling The Gauntlet.

The Gauntlet is a technical, two mile descent. After all of that climbing, you would think a long descent would be welcome. But this downhill is tough on the quads and on the knees. You also have to be careful not to trip on a rock or root and Superman down the mountain.

I counted down the distance as we made our way down Gauntlet. This was the one section of the race that I couldn’t wait to get through.

As we made our way down, a couple of women ran by who were also out doing their CtC virtual race. It was fun to see others out on the course! Finally, we made it down Gauntlet and had just 1.25 miles to go up Horsepen and back to our cars.

Horsepen usually feels like it takes forever. But honestly, it went by really quickly this time. The entire run – 13 miles with ~2200 ft of climbing – flew by with Lauren and Lauren. That, combined with the weather conditions, made for a really great day. We finished around 4 hours and 15 minutes.

To cap things off, we stopped for a photo in front of the Pegasus house on our way out.

From here, I have some upcoming adventures planned during the summer and early fall. I’m not registered for any other races until October. It’s hard to know what life will look like then, but I’m hopeful that we will have returned to some normalcy by then and some of these events will be able to take place.

Days 1 and 2 of this years Harry Potter advent calendar! Olivander’s and the quidditch hoops
Friday night hikes 😊
Lego Christmas Village 2022 is complete! 🎄
Thanksgiving ✅ On to Christmas…
Bring on the upsets, the drama, the underdogs, and the histrionics. Let’s see who is the best in the world!! #fifaworldcup
Thanksgiving is always a puzzle. Luckily, I happen to like puzzles… and lists. 😊