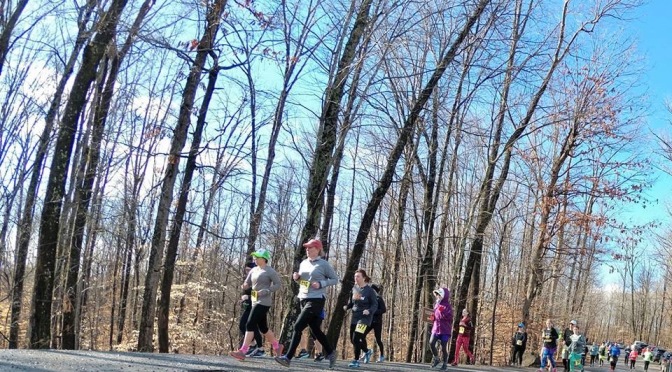 This past Saturday I headed up the road to Roanoke’s Explore Park for race #2 in the Mountain Junkies RNUTS series. It was a crisp, clear morning and I was feeling excited for the race. Such a nice change from all of the rain and gloomy weather we have had lately. I arrived about 15 minutes prior to the pre-race meeting. That was plenty of time to park, hit the restroom, and get my race bib and shirt before the meeting. I love small races.

Following the pre-race meeting, we walked down to the starting area. I was happy to find a campground has been installed (is that the right word?) since the last time I was at the park. That meant we didn’t have to scramble up a slick, muddy grassy hill right at the beginning of the run. Sweet. Just after 9 AM, the 10K runners were off to the races. The 5K would follow 10 minutes later.

We had a short stretch along paved and gravel roads before heading into the woods onto the singletrack. I felt good and tried to keep my pace comfortable. There’s a lot of downhill during the first mile. I couldn’t run quite as fast as I wanted, because the trail was muddy and leaf-covered. But I gotta tell you, I was having a blast.

We encountered the first true hill of the day during the second mile. The course did a small loop here, so we got to see some runners ahead of us. We looped around at the top of the hill and headed back downhill for a short, flat stretch along the river. As I approached mile 2, the blazing fast leaders of the 5K began catching me. At this point, we were on a wide path and it was easy for them to pass. We headed up another short, steep hill and hit the first water stop just after mile 2. I grabbed a quick drink of water and kept rolling.

We had a brief respite before the real fun began. As we made our way to mile 3, we climbed a hill lovingly nicknamed “vomit hill.” It is tough. In the past I have always walked this entire hill. But this year I made a goal to alternate running and walking – so I took 20 steps of running and 20 steps of walking until I made it to the top.

From here, we were back on the paved road where we started. We ran by the finish line, where the 5K runners split off. The 10K runners continued onto a 3 mile lollipop loop. I have never run this 10K, but I knew the course (in 2015 I dropped mid-race to the 5K due to snowy conditions). I worried that I would pass the 5K finish line at the halfway point, and want to be done. But I’m happy to report I was in good spirits and excited to keep going.

There were some more challenging hills along the way. Some of the downhills through this section were also challenging, as they were leaf-covered, muddy, and had large rocks. Some of the mud was even ankle deep! But before I knew it, I passed mile 5 and was on the final mile of the race. My legs were definitely starting to feel tired now, but that’s to be expected towards the end of a race.

That last steep uphill to the finish was tough and I tried to hike and run it at a good pace. I finished in 1:16:38. My goals going into this race were to run strong and solid, and to finish in under 1:20. Overall, I was happy with my race. I felt good both physically and mentally, and I feel like I’m regaining a bit of my mojo after last week.

I spent some time catching up with several friends and watched some of the awards before hitting the road to head home. Next on the schedule is my first Fat Ass-style race next weekend and then my favorite RNUTS Race – Montvale 10 Miler!