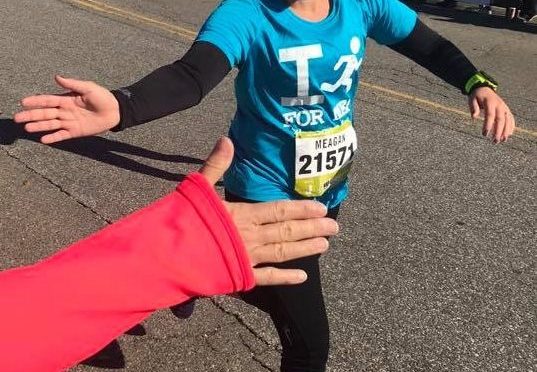 On November 10, I ran Richmond for the fourth year. I love this race, and even more so with the Meg’s Miles family (there’s so much more to this weekend now than just the race). Richmond is where I ran my PR half marathon in 2012. I definitely wasn’t gunning for a PR this year. But I also didn’t really know what to expect since this was my first road half in over three years. I ended up surprising myself a bit.

Kim drove me and several others from our hotel in Ashland to the start on race morning (she did all of the driving that weekend – thank you, Kim!). It was an easy trip to the start. We hit the porta potties, dropped off checked bags, wished each other good luck, and prepared for the start. I lined up in my wave and waited for the party to begin. 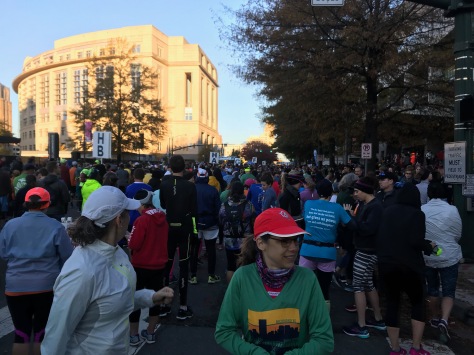 I was in one of the last waves, and we finally got going about 20 minutes after the gun. It was crowded early on. I did my best to run along with the pace of the group and tried to get around those walking 3, 4, 5 abreast (ugh). I mostly used a 30 minute run / 5 minute walk interval for the first 10 miles.

I felt good during the early miles. The weather was perfect – sunny and crisp. My breathing was relaxed and my legs felt strong. Around mile 4 I realized I kind of needed to pee, but all of the porta johns along the course had lines. I didn’t feel like stopping so I just held it to the end. Too much info? Oh well, just keeping it real.

Around mile 5, I was running near two guys. They saw a girl they knew, Tiffany, who was also running the race. They both excitedly said hi to her and chatted for a minute. When she ran off, I overhead the following conversation:

The things you overhear at races….

My goal going into the race was to finish in 2:30. A little before the 10K mark, I started to realize 2:25 was possible. We headed into the park and I got to see several Megs Miles runners headed back out. The loop through here gets quiet, and I kind of enjoyed the peace of just being surrounded by other runners. I hit the 10K split in 1:09:34.

Call me crazy, but I enjoyed running the hills out of the park. I felt strong, so I picked up the pace during my run intervals. I ran by a junk food stop around mile 9. I didn’t stop at the table, but I did grab a cup of Coca Cola. It was like rocket fuel for me at New River Trail 50K, so I figured I’d see if it could work its magic again. It helped and around mile 10 I realized 2:20 was possible.

I definitely started feeling tired by mile 11, but that’s to be expected. I ran by an unofficial beer stop, where they were serving something called “Sprint Lite.” I’ve never heard of that one, so I took a pass on it.

Even though I was tired, the final two miles of the race really flew by for me. I made a few turns through the downtown area, and before I knew it I made the final turn onto the big downhill to the finish line at Brown’s Island. I was so excited to see the big Meg’s Miles cheering section just before the finish line.

I crossed the finish line in 2:20:16 for a negative split and a sub-11 average pace – that’s something I haven’t seen at a race in quite awhile! 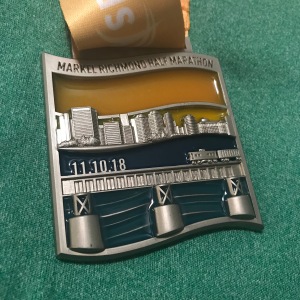 I exceeded my own expectations and feel like I ran a strong and well-paced race. All in all, it was a great day.

I hope y’all have a safe and happy Thanksgiving!!