It’s also funny how my first two races back just kind of happened without any planning.

My running buddy, Kim, was also running this race. We met up bright an early on race morning, July 7, to carpool over to Mountain Lake Lodge. In case you didn’t know, this is where they filmed Dirty Dancing. 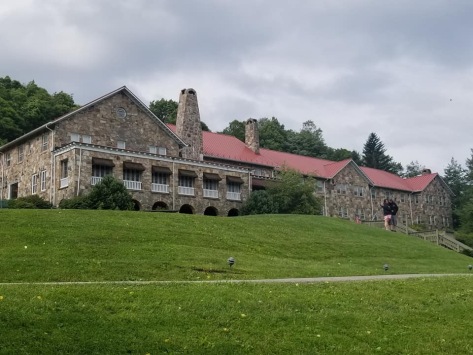 I hadn’t seen much of Kim lately, since I’ve been on the sidelines, and I was looking forward to hanging out with her. I figured I would see her at the start and finish of the race, as she’s gotten speedy over the past months. But she informed me she intended to stick with me during the race and that’s just what we did.

This race is entirely uphill. Runners park at the top of the mountain and then take a fun bus ride down the mountain to the start line. The road the bus drives down is the same road we would be running up, and the longer that ride went on the more we grasped the task at hand.

After a quick port-a-john visit and some milling around, it was time to run. I decided on using a quarter mile run/ quarter mile walk strategy right from the beginning and it worked out really well. Kim and I had a good time together. I even did a little impromptu, mid-race Missy Elliott rapping (you had to be there, and no I won’t reenact it).

The run/walk thing worked well for the first 5.25 miles. By that point I was really tired and just kind of did whatever I could manage for the final mile. In all, we climbed a little over 2,000 feet during the race. Here’s an elevation profile that will make you feel like a bad ass.

We encountered a race photographer during the final mile, and he was nice enough to allow us to start running before taking our photo.

We hung out at the finish line, chatted with friends, cheered on other finishers, and enjoyed the lemonade and PB&J’s they had for us. Since most of us were last minute registrants for the race, we didn’t get shirts. However, they did have a box of extra shirts that were made available on a first come, first serve basis. We totally missed the memo on when that started, though, and missed out on a shirt. Bummer.

As with the Downtown Sundown 5K, I exceeded my expectations for this race. And you know what? It turns out climbing 2000 feet over 6.2 miles isn’t quite as bad as I thought. It was tough, but it wasn’t that bad. Honestly. Don’t tell, but I’ll probably do it again next year. I want a t-shirt, dang it!

One thought on “Hell Climb 10K”