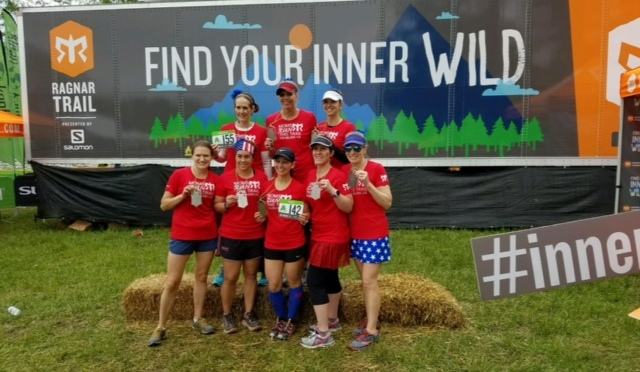 I’m linking up this morning with Holly and Tricia for their Weekly Wrap link up. This past weekend was one wild and crazy ride, and I’m still trying to wrap my head out of it. Right now it is a blur of dirt trails and trees, sleep deprivation, newfound friends, fear of not being able to do it, and then crossing the finish line and proving to myself that I could. 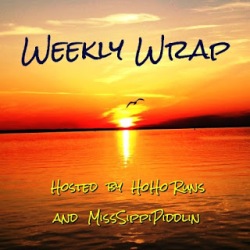 I probably won’t have a recap up until at least next week. It takes awhile to decompress from these Ragnar events. Here are a few details….

Our team began running on Friday at 2 PM and finished sometime around 5:00 PM Saturday (I think… it was sometime Saturday afternoon anyway). The total advertised distance was 125.6 miles, which we split between four people as an ultra team. However, it seemed that the loops were actually a bit longer, and we all agreed each of us ran between 33 and 34 miles for a total of 132-136 miles. I ran with Debbie’s Moms Run This Town group and since we fielded two ultra teams we were able to pair up, so everyone had a buddy to run with in the woods. Deb and I ran together and had a blast keeping each other company and swapping stories.

This was my third Ragnar and I thought I might break my streak of not sleeping during Ragnar Relay events, but alas it happened again. I tried my hardest to get some sleep from 11 PM to 2 AM or so, but it just didn’t happen. Instead I set a new record for staying awake: 40 hours. 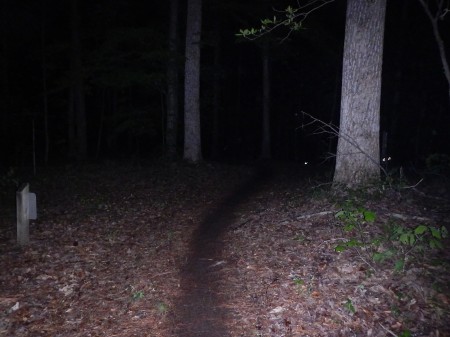 Deb and I also got to meet Karen during the event!! She came over to the state park on Friday afternoon and she was just as nice and friendly as she seems on her blog. 🙂 She even brought us presents, which was super sweet! I’m so glad we got to meet, and I wish we could have hung out longer (or even gone on a run together!).

There were times during the event when I worried I had bitten off more than I could chew, despite having run my 50K a few weekends ago. We finished our first leg of the relay, which ended up being a little over 12 miles, and the distance we had left to run started to feel very daunting. Luckily Barry happened to be there in that moment and it was just the two of us. He was able to talk me down before I went into full on freak out mode.

Things got super confusing towards the end, and we took matters into our own hands since the Ragnar officials were not on the same page as us (more on this later…).

In the end, we pulled it off. The trails at Pocahontas State Park were awesome. I was surprised at how large the park was and I’d definitely love to go back sometime to explore some more.

I’ve now run a road Ragnar from Maryland to DC, a trail Ragnar in WV on a non-ultra team (8 people), and now Ragnar in Richmond on an ultra team. These events are so challenging in a unique way because you take the miles you are running and spread them out over roughly a 24 hour period and you are often running on little to no sleep. But the camaraderie with your team makes it really special. Ragnar is a bonding experience for sure, and you’ll definitely form new friendships along thew way. In total, our Moms Run This Town group had 24 runners (2 ultra teams, 2 non-ultra teams). We camped all together and hung out between our runs. I had so much fun with them and met so many awesome new people. I went into this event knowing it would be my last Ragnar Relay. But it wouldn’t be too difficult to convince me to do another one (not on an ultra team, though!).

Have you ever run trails in the dark?
What’s the longest you have ever stayed up at one time?