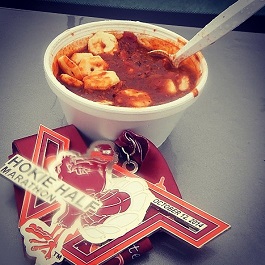 One word can describe Sunday’s race in the most basic way: wet. I was soaked to the bone about as much as I’ve ever been during a race. I woke up Sunday morning to a cold, steady rain (after getting 4 hours of broken sleep – stupid cough). The forecast was 60% chance of light rain showers, so I hoped for the best. But on this day, the best was not to be. 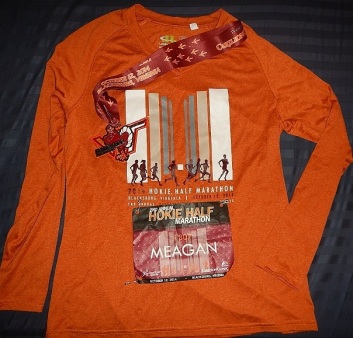 I had my new favorite pre-race breakfast of a pancake with a thin spread of peanut butter, along with a cup of coffee. Once we fed the dogs and Annabelle, Barry and I hit the road to make the 30-40 minute drive to Blacksburg. It was dark, chilly, and rainy. The kind of day where you’d rather crawl back under the covers than be outside. But the second annual Hokie Half Marathon beckoned.

We arrived about 30 minutes prior to the race start and parked with ease near the start/finish line. Barry and I separated before the start of the race, and I made my way over to the porta potties in the pouring rain. A lady ushered me inside an adjacent building, telling me there was no line for the bathrooms inside. Lo and behold there was no line and I got a small break from the rain. I hurried over to the start just as the gun went off. They had two waves for the start, and I wasn’t sure if wave 2 was just kind of going right after wave 1, so I jumped in with the mass of people moving towards the start line and before I knew it I was off and running. As it would turn out, I started at the very back of wave 1 (wave 1 was meant to be 2:11 and under).

My goal going into the race was to run the first few miles easy, and then get in a solid 10 mile run at marathon pace. But the race day weather, along with how I felt on my run the Friday before the race, made me adjust my goals. I decided to just run at whatever pace felt comfortable, enjoy the race, and not wear myself out before the Marine Corps Marathon. Despite the weather, I did end up having a pretty good time!

All of my photos are roughly the quality of the one above, so that’s something for you to look forward to 🙂 My camera is waterproof, so I was still able to snap some photos along the course. I did a bad job of taking pictures last year, so I wanted to get a few this year, even if they were water-logged ones. 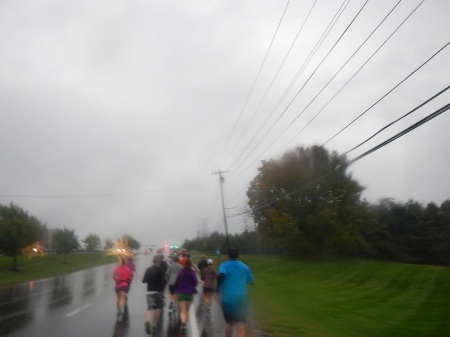 For the first few miles we ran on roads through Christiansburg as we made our way from the start area in Blacksburg over to the Huckleberry Trail at the New River Valley Mall. A lot of people were running pretty fast at this point, and I was getting passed a lot. I let them all go, though, figuring I would see some of them again. Spoiler alert: I saw lots of them again when we hit the hills 🙂 As we turned into the mall, I saw two funny signs. One said “This seems like a lot of work for a free banana” and the other said “Quit reading this sign and get going!.” I wanted to get a picture, but they were across the road and it was open to traffic. Shortly after entering the mall we hopped on the Huckleberry Trail as we headed towards mile four.

I was carrying my handheld water bottle with me, but I was not very thirsty until mile 9 or so. I took sips of water from it on the even miles, but I really didn’t feel like it. I guess it was just because of the cool weather and the rain. At the end of the race, I had drunk less than 20 ounces of water. That won’t fly for Marine Corps.

The first few miles on the Huckleberry Trail were relatively flat/downhill. Normally I would pick it up here to “bank” time, knowing we were headed for the hills. But this year I chose to take it easy during this section to conserve energy. I think it really helped, as I felt very strong on all of the hills. At mile 5.5 I had a Salted Caramel Gu just before we headed into the hillier portion of the course.

I usually don’t pay much attention to what my competition is doing during a longer race like this. I focus on my own goals and compete against myself. But as we hit the hills of the Huckleberry, I started passing a lot of people. And I must admit, I was enjoying myself. It really gave me a boost to see people stop to walk on the hills as I cruised up them with plenty of energy left. There’s one long, gradual hill just before mile 8 that is always tough for me. During the race I powered up it while telling myself “no surrender” over and over.

Around mile 10 fatigue started to creep into my legs, as we ran through local neighborhoods. Up until this point I was feeling very comfortable, both in my legs and with my breathing. I also suddenly felt very empty and hungry. I ate two Shot Bloks and drank some water and focused on getting to mile 11.

Mile 10 felt long, but finally I reached mile 11. I had another sip of water and told myself “Okay, two more to go. Let’s get this done.” At this point we were on another paved bike trail and headed back towards the finish line. Mile 11 actually flew by and before I knew it I was passing by the mile 12 marker. There was a band at mile 12 playing “Play That Funky Music White Boy” and I had to fight the urge to dance!

We had one final hill to conquer towards the end of mile 12 and then it was downhill and flat to the finish! I was so happy to see that finish line. It had alternated between raining steadily and pouring the entire race and I was ready to get out of the rain. I think I finished somewhere around 2:20. My watch had me at 2:19:28 (10:41/mile pace), but I had a bit of a snafu getting it started for the first tenth of a mile of the race.

After crossing the finish line, I received a finisher’s shirt, medal, and a car magnet. They also had a volunteer standing at the finish asking each person if he/she was okay. That was really good, because the race conditions were very similar to the Asheville Half Marathon, where a lot of people were treated for hypothermia. I actually ended up in the medical tent at the end of that race, but it was due to my own stupidity 🙂

Once I got away from the finish line area, I quickly met up with Barry, Deb, and her husband Bill. We got in line for the post-race food and took a few soggy group photos together.

The quality of these photos really captures how wet it was outside and how wet we were. There wasn’t even any way to wipe off the lens of my camera. I guess we can call these “dreamy” photos.

In talking with Deb, Bill, and Barry it sounded like everyone had great races all around! Barry finished his race around 1:44 (he doesn’t wear a watch). We were rewarded with some piping hot, delicious turkey chili. Definitely a special treat, and a staple item for the Hokie Half. They also had granola bars, bananas, mini chocolate candy, pretzels, water, soft drinks, and vegetarian chili.

Once we all got through the food line, we headed to our cars since everyone was freezing. I was shaking so much that I splashed chili on my white finisher’s shirt. Barry had the same thing happen with his shirt after he finished. Luckily, I was able to get the stains out by washing them as soon as we got home!

The Hokie Half is definitely one of my favorite races. Virginia Tech will always feel like a second home to me, and this race has a hometown feel. Hopefully I can continue to run this race every year, and become a “Hokie Half streaker.” With this race behind me, it’s on to Marine Corps!!

Have you ever run a race in the rain like this one?
Are you seeing some pretty fall foliage in your area?
What’s the best post-race food you’ve had after a race (that was provided by the race)? I think the turkey chili wins this one for me!