This week was peak week of training!! Let me tell you – peak week is a bad time to be on week 3 of a never-ending cold. But that’s exactly what I was going through all week. Y’all are probably wondering why I hadn’t gone to the doctor, after being sick for so long. Even though I’d been pretty miserable at times, none of my symptoms seem like anything other than a nasty, common cold. At the end of the week I found out otherwise.

Monday- Rest day. I was supposed to do an easy 7 miler, but I was feeling awful. After suffering through 5 hours of work I threw in the towel, went home, and slept on and off the rest of the day. This would have been a good time to visit the doctor….

Tuesday- I was feeling better from Monday and ready to get back at it, aside from a throbbing headache. I planned to do 2 x 3 miles with a 1 mile recovery for 10 miles total and that’s what I did. However, I had not planned on doing this workout on the treadmill. I ended up working late and was forced to run with Sven, though, since I had my fill of running alone in the dark during Ragnar.

My goal for the 3 mile repeats was 30:24 and I split 30:29 on the first one (figuring out what speed to set the treadmill) and 30:24 on the second (got things figured out). Aside from my pounding headache, everything else felt good. Although I was surprised to find a bloody toe when I took off my running shoes after my run. Turns out I didn’t quite cut one of my toenails right on Sunday afternoon and there was a sharp edge. Oops.

Wednesday- Rest day. I was going to make up my Monday run, and just make Monday my one rest day for the week. But my cold was still hanging on, and I had a cough and pounding headache all day. So when I got home from work I decided to just take the rest day as scheduled and just let Monday be a lost day of training.

Let it go and move on. The goal was to complete my Thursday tempo run and my 16 mile long run on Sunday.

Thursday- 10 mile run, with 8 miles at tempo (marathon pace). I probably shouldn’t have done this run, but I didn’t want to miss it. I was still feeling pretty bad, and was coughing more than ever. This run felt so tough. My chest was very tight during the run, and I often couldn’t catch my breath due to the coughing. At times it felt like I was trying to breathe through a straw.

So probably not smart that I ran anyway, but I was hopeful that this cold that had lasted for three weeks must be on its way out. Even though running felt tough, I still managed to average 10:14/mile for my tempo miles (my goal pace is 10:18/mile). I really hope I’m not sick come marathon morning! 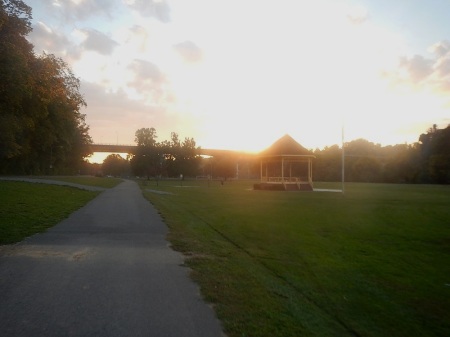 Friday- 6 mile easy run on the treadmill. I still wasn’t feeling better, I still ran. My cough was a lot better from Thursday, but in it’s place came an incredibly stuffy nose and aches all over. No fun.

Saturday- To my dismay, I found that I was still sick when I woke up. I took it easy in the morning and even surfed WebMD (always dangerous). It turns out when you have a cold for longer than 10 days it typically means you have a sinus infection. It’s recommended that you go to the doctor and get antibiotics. That probably would have been a good thing to figure out on Monday…

I had myself convinced that if I rested all day Saturday, and skipped my easy 6 miler, I would totally be able to gut it out for 16 miles on Sunday. Clearly I had moved out of Virginia and into the state of Delusion.

Sunday- This was supposed to be my third 16 miler (the Hansons version of a 20 miler during marathon training). ICYMI: My first 16 miler was awesome, and I missed the second due to right shin pain.

I’m probably surprising no one when I tell you that I did not run yesterday. Instead, I was up at 4:30 AM because I was just too uncomfortable to sleep anymore. I let Kim know that I wouldn’t be able to join her. She suggested I go to the urgent care. For some reason that hadn’t dawned on me! I was thinking my only option was to wait until the work week, and figure out how to squeeze a doctor visit into a very busy week.

Instead, I was able to go to the doctor late Sunday morning and guess what – I have sinusitis. Again, probably surprising no one but myself at this point. They prescribed some antibiotics and I should be feeling better in a few days. Had I gone to the doctor on Monday I may not have missed this key final long run in training. Lesson learned. Also fyi- be careful if you ever decide to be stupid like me and run through an untreated sinus infection. I was working my way down a dangerous path that ultimately would lead to pneumonia.