It finally happened. Last Friday afternoon the dogs were out back, Barry was in the living room watching TV, and I was in the bedroom packing for our weekend trip to Asheville. Barry happened to look outside and saw that Hank was actually in the chicken run. Sometimes when you glance outside, and the dogs are walking along the chicken run fence, it looks like they are inside but they’re not. This time, it wasn’t an illusion.

Barry shouted to me that Hank was in the chicken run as he headed out the back door, expecting to find dead chickens. I wasn’t far behind. You won’t believe what we found when we got out there. Six chickens pecking the ground like nothing was wrong, and one bloodhound sniffing the ground with immense interest. I gotta say, Hank really shocked me this time.

The first time we tried to introduce Hank to the chickens was when they were babies living in our garage in their brooder box. The first thing he tried to do was bite the head off of one of them. So from that time on, we have always kept the chickens and dogs separated. 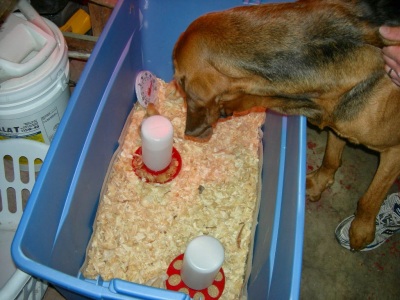 We did our best to dog-proof the chicken coop and run area, in effect protecting the chickens from other types of predators as well. But I figured it was only a matter of time until the one of the dogs found a way in. Hank, especially, is so strong that if he wants to do something it’s inevitable.

Hank gained access to the chicken run area by breaking one of the ties that holds the chain link to the fence post, and squeezing between the two. He has gone under the fence once before, but ended up out in the field instead of in the chicken run. That was the time he got me tied up in a barbed wire fence. But this time he was successful. By some miracle, we still have six chickens.

I would have thought the chickens would have run into their coop to get away from him, but apparently they saw no threat. When we got out there, I opened the gate to the chicken run and Hank came trotting out. He wouldn’t come near Barry or me, because he thought he was in trouble. But the truth is, we didn’t punish him because he didn’t attack the chickens. He certainly did wrong by going under the fence and into the chicken run area, but he seemed to know he had been naughty.

So this story has a fairytale ending. We made some adjustments in the fence to deter the dogs (see above picture where five ties now hold the chainlink to the fence post), the chickens are alive and well, and the dogs remain infinitely curious about the coop and run area. For now, we all live happily ever after. Oh and our other dog, Scout? She just watched the whole thing like nothing out of the ordinary was going on.

Tell me about a time when you had something happen that could have been disastrous, but turned out alright.

12 thoughts on “So Hank got into the chicken coop…”