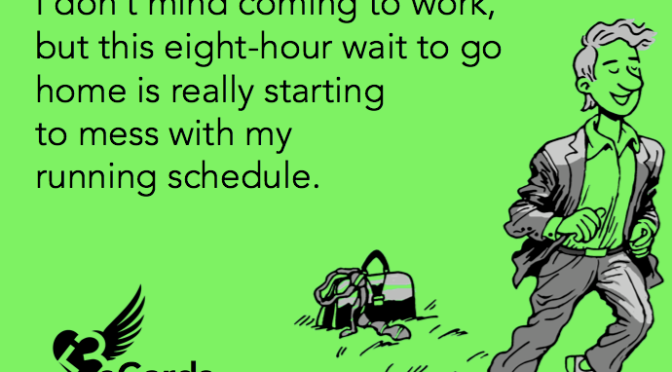 Happy Veterans Day! Thank you to all those who have served and those who are currently serving. Thank you for defending our freedom at all costs. Never forget that freedom doesn’t come free. Also, happy (belated) 238th birthday to the USMC! The past two years the Richmond Marathon has taken place on the same weekend as the Marine Corps birthday and I always loved seeing all of the Marines in their blue dress uniforms headed to the Marine Corps Ball.
———————————————————-
This was my final full week of marathon training and I was in full taper mode. It’s a good thing it is taper time, because I had some very late nights at work this week (ending at 7 and 8 PM, yuck!) that impacted my running schedule a bit. But I still managed to get a few solid runs in. It’s been a long four months, and although I’m nervous I’m also chomping at the bit!

Tuesday- Unplanned rest day (got home from work at 8 PM). However, from this day of work I can tell you that Bluefield, VA already has their Christmas decorations up (Christmas tree made of lights and shooting star red/green lights on every lamp post). It was dark as I left town to drive home and they even had the decorations turned on already!

Wednesday- 5 miles with Sven in the morning before work. After two days of working late into the evening, I decided I better get a morning run in to guarantee I would get to run. It was still dark outside, which is why I stuck to the treadmill. I waited to add wood to the fire in the woodstove until after my run, so that it wasn’t as hot.

Thursday- Another 5 miles with Sven in the basement in the heat of the woodstove (which was burning full force). I intended to do this run outside after work, but alas I got stuck working late again and it was already dark when I got home.

I watched the movie Soul Surfer while I ran and played with the incline a lot to make up for not being outside. I ended up with 508 vertical feet for 5 miles, which I guess is good? Charlotte has a rolling course and has a total of 1,168 feet in elevation gain over the 26.2 miles (and total elevation change of 2,349 feet).

My left shin felt great during the run and didn’t bother me at all. I still stretched a lot afterwards and continued to ice.

Friday- Rest day from running. Barry and I did take the dogs on a walk, which I guess we will count as some light cross training. Really I just wanted to share a picture of Hank and Scout on their walk because I think they are really cute! Hank was super excited to go for a walk 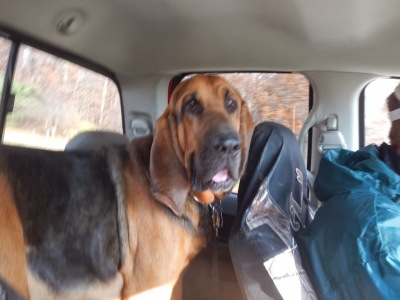 Scout likes riding in the truck, but is not thrilled when it comes to anything related to exercise. 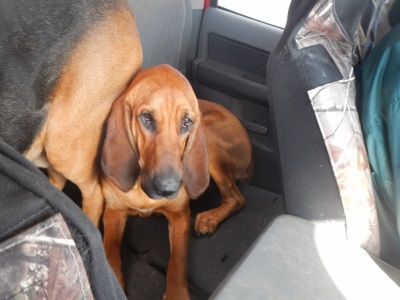 But once we got to the park and started walking through the woods she livened up a bit. They both love tracking (they are bloodhounds, after all) and spend the majority of any walk with their noses to the ground. 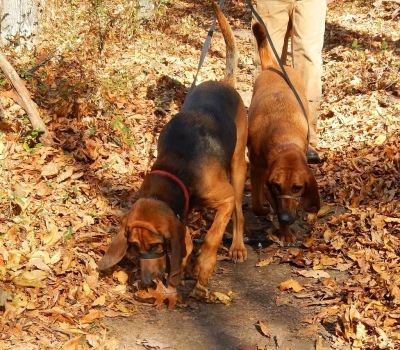 Saturday- 10 mile long run on the Huckleberry Trail. This was my last double digit run before the race. It was pretty cold at the start of my run (24 degrees!) but warmed up to the high 40’s by the end. At least it wasn’t super windy like it had been most of the week. I had to change my plans a bit when the bridge about 1.25 miles down the trail was closed, so I did a handful of out and backs, ran around the mall, and explored the new branch of the trail that they have been working on. 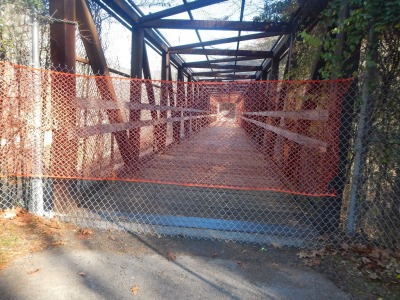 My leg felt good, but I had a hard time getting into a rhythm. By the end of the run, I felt like I was getting into a good stride. I’ll take that as a good omen for this weekend. My Shot Bloks did freeze, which made them really difficult to chew, but I managed.

To top off a good run, Barry and I watched the Hokies beat Miami that evening. I finally saw them play like the Hokies I know and love! (they had been missing for two weeks)

Sunday- I had big plans for a fun afternoon bike ride with Barry on the trail, or maybe a long walk with the dogs, or both. But then we had 20-30 mph wind pretty much all day, which nixed both of those ideas. Instead, I took a rest day. But I did spend time cleaning the house and cleaning our camper in preparation for our trip to Charlotte this weekend. 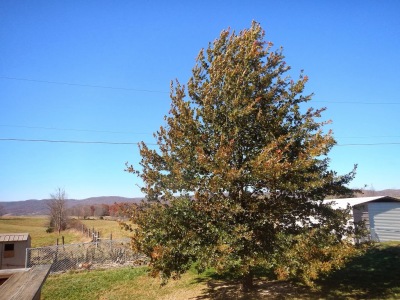 The above picture is my attempt at taking a picture of the wind. I know you technically can’t do that. But you can take a picture of a tree blowing in the wind, which is what I did. This may not show it very well but trust me, it was crazy windy.