Let’s start by backing up to Wednesday. After completing my first marathon pace run I spent the rest of the day relaxing on the beach, working on my shorts tan. After four full days of hard work (and by that I mean laying in the sun), it’s almost gone!! I started reading Let’s Pretend This Never Happened by Jenny Lawson and let me tell you it is hilarious! I am three-fourths of the way through and am thoroughly enjoying this book. You should totally check it out if you haven’t read it. I first heard about this book when Logan listened to it as an audiobook during her first ultra earlier this year. I now understand why she was laughing out loud and probably making the runners around her thinking she was either crazy or going into some kind of state due to running for so long.

After a day on the beach and some dinner in our bellies (shrimp spaghetti made by moi) we headed out to Painters! 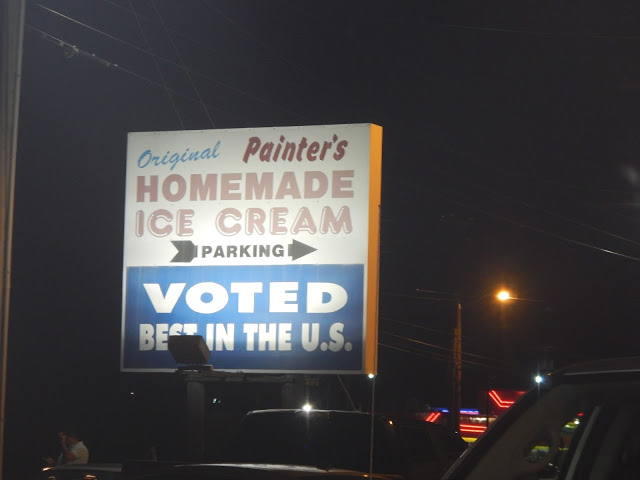 We always go to Painters when we are at the beach. It was really crowded on Wednesday (nothing new there) but totally worth the wait. I think we really only waited 5-10 minutes to place our order and get our ice cream. 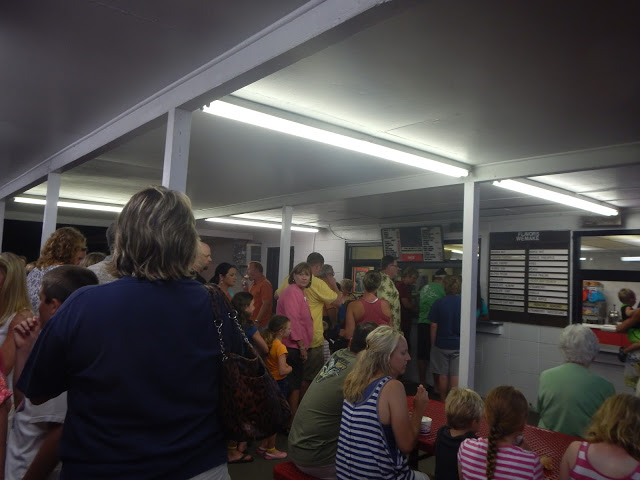 I always debate on what flavor to order. More often than not I go with Strawberry because it’s my favorite and I know it’ll be good. I’m always afraid to try something new in case it’s not good and then I will have ruined my one shot at Painters for the year. But this year I decided to walk on the wild side and ordered Banana Pudding!

It ended up being a good decision! Although next year I will probably get Strawberry.

Barry got an Oreo milkshake and my little sister got a banana split. My Dad foot the bill, but did not indulge in any ice cream.

Who would have thought a recap of a trip to get ice cream would require five pictures?

Thursday was a rest day from running and another day spent on the beach reading Let’s Pretend This Never Happened and some magazines. When I got down to the beach my dad and little sister were already there. I was standing in front of my sister, who was sitting in her beach chair, when she said “your calves look meatier since the last time I saw you.” I replied “gee, thanks!” and she said “no I mean it like they’ve gotten stronger.” To which I said “well it sounds like you’re calling them fat.” And then she said “at least you don’t have cankles.”

About an hour and a half after this exchange my little sister stands up (don’t forget, we’re on the beach) and says she’s going to go in for the day. As she’s packing up her stuff she declares “there’s sand everywhere!” and then she left. Barry, my dad, and I didn’t know what to say to that one.

This morning I had a tough 4 mile run. It’s really humid and I felt like I was melting. I also just felt like I didn’t have any energy. It probably would have helped if I had drank more than 2 bottles of water yesterday (my urine was brown after spending the day on the beach yesterday… I know you wanted to know that). But I got through it. Here’s where I ran:

And here’s to hoping I feel better on my long run tomorrow. But if it’s just as tough as today…. at least I don’t have cankles. At least there’s that. (Note: You should know that on one side of my family cankles are a very common thing to have, so I mean no offense. It’s a family thing I guess)

Do you have any siblings?

What’s the last random or ridiculous thing someone said to you?

Have you read Let’s Pretend This Never Happened?

14 thoughts on “At least I don’t have cankles”