The chicks had a pretty big week this past week. On Wednesday they moved from their brooder box in the garage into their coop!

Before the chicks made their big move, we made some final repairs to the building. On Monday evening we Barry put the new roof on. 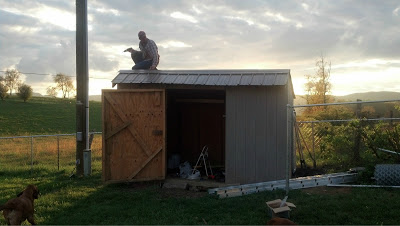 Basically all I did was keep him company, hand pieces of metal roofing up to him as needed, and pick up fallen screws from the grass. Barry did a great job and now the chickens have a brand new roof to keep them dry and out of the weather.

On Wednesday evening we put up mesh on the gaps on the front of the building. This allows the coop to be ventilated while protecting the chickens from predators. A coon would easily climb through that gap if we didn’t have the mesh there.

Once that was finished we set up the feeder (which is elevated) and waterer, put down some bedding, and set up the heat lamp.

Then we brought the chicks outside to their new home. There was a lot of exploring and pecking that went on.

They’re not big enough, yet, to get up onto their roosting poles, but we put them up there just for fun. 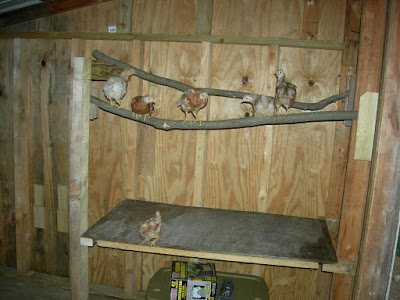 They seemed pretty content up there and I think when they are bigger they will like sleeping on the poles. 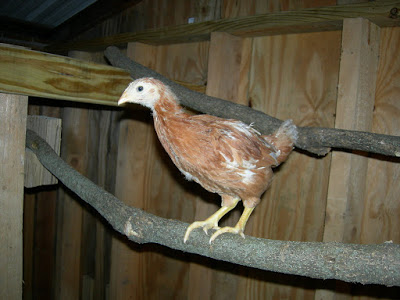 The chicks settled in to their new abode and seem to be enjoying the new space they have to move around. They were definitely getting too big for their little brooder, which is funny because the brooder seemed so big a week and a half ago.

We still have to finish up the chicken run area for them, so for now they will pretty much stay in the coop except if we let them run around in the yard. We will also be putting a few other touches on the coop, including a window to the right of the door (where the roosting poles are). This way when the sun rises in the morning the chickens, who will theoretically be sleeping on the roosting poles, will know it’s time to get up and go lay an egg!

Oh and this is how the coop looked like before we started converting it. I’m pretty proud of how far we’ve already come 🙂

Are you doing anything special for Cinco de Mayo?
I bought some Sol yesterday (my favorite beer… it’s like Corona but better), and we are going to a friend’s house warming cookout this evening.

What do you think of the chick’s new abode?

Nighttime miles with @nrvrun4meg during her 48 hour challenge!
Three amigos on my run. 😊
What.
New babies. Here we go again.
Time for an October rewatch. 😎 #StrangerThings
Glimpses of Fall…. and Christmas. 😜#trailrunning