This evening we made the hour trip up to Roanoke to attend the expo and pick up our bibs. The expo was larger than last year and they held it in the City Market Building instead of the Taubman Museum. Picking up our race bibs and t-shirts went smoothly and we spent a little time looking at everything there was to see. 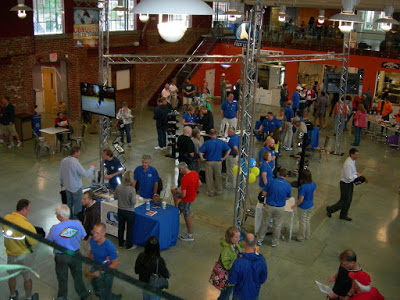 This year they not only switched to technical shirts, but they also did a separate shirt for the half and full (which I think is great!) AND they had men’s and women’s sizes. Last year I felt the shirt (a cotton white t-shirt that was the same for the half and full) had a lot of room for improvement, and they came through! I will show you the shirt tomorrow, as part of my race report. I feel like showing a picture of it is like wearing it before completing the race… bad mojo.

Yesterday I mentioned that I was hoping Bill Rodgers, Frank Shorter, and Bart Yasso would be at the expo. And guess what!? They were!! You may have already spotted them in the birds eye view of the expo. 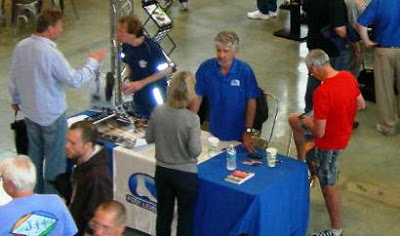 I got to talk to all three of them (although it was hard to get Bart Yasso to detach from his iPad) and they signed my bib. We lucked out and there was no line to talk to them! But as soon as I finished there was a line of about 20 people or so. I guess we timed that one right.

Bill Rodgers said “Lets run forever!”, Frank Shorter said “Way to run!”, and Bart Yasso said “Yasso 800s”…. apparently he knows about my plans to start doing speed work. It was all very exciting and once we were done at the expo I wasn’t quite ready to leave yet, so we walked the two blocks over to the finish line area. 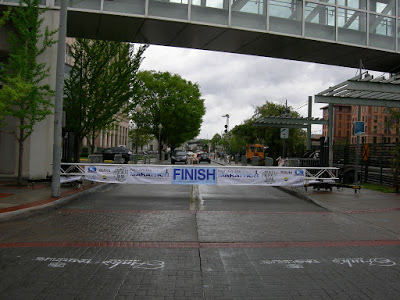 And since we were in Roanoke I also decided we should go by Viva La Cupcake to get some treats for after the race tomorrow. For some reason they don’t look as appetizing in the picture… I don’t know why the key lime pie flavor looks so green. They said tomorrow they will have a banana cream pie flavored cupcake, so we may have to go back!

I have something unrelated to running to share with you. Although I probably could relate it back to running…. I’m as good at that as the father in My Big Fat Greek Wedding was at relating everything back to Greek.

But now I’ve gotten off topic. Here is what I wanted to tell you. Remember during last year’s Olympics how Kerri Walsh Jennings, the volleyball player who plays with teammate Misty May-Treanor, was actually pregnant? Well she had her baby recently and guess what!? She named her baby after our puppy 🙂 I saw an interview where she revealed that the name of their baby girl is Scout, and that she named her after her favorite character in literature. That’s also where I got the name Scout for our puppy! To Kill A Mockingbird is one of my most favorite books.

What is your night before a race routine?
I get all of my clothes set out for the race tomorrow and try to get to bed early.
Do you have a specific meal you eat either the night before or the day of a race?
Spaghetti & meatballs!
﻿
﻿