Since my Sundays usually consist of a rest day, cleaning, laundry, and regrouping for the coming week (not very interesting blog material) I decided to start a mini series on chickens!

You read that right- chickens. Barry and I decided to get some chicks, so on Friday I went down to Tractor Supply and picked up six 4 day old baby chicks. They are all supposed to be female and the breed is Red Sex Link.

When you bring home baby chicks, you have to have a brooding area where they will live for the first 60 days or so. We used a cardboard box, covered the bottom with 2-3 inches of pine shavings, and have a heat lamp. You want your brooder to have at least 18 inch walls, to guard the chicks from drafts. For the first week or so the chicks need it to be 90 to 100 degrees under the lamp. After that we will decrease it by 5 degrees (by raising the lamp) each week until they have their feathers.

You can guage how much heat they need just by looking at where they are in the brooder. If they are huddled together under the light they are cold (they’ll also peep a lot when they’re cold). If they are spread out along the edges, as far from the light as they can get, they are too hot. If they are just kind of scattered throughout then they are comfy cozy! The intent of the brooder is to keep the chicks near the heat source and protect them from drafts.

We have the brooder (cardboard box) in the garage, where the dogs won’t mess with the chicks. For the first two weeks they need one-half square foot per chick and after that they’ll need one square foot per bird. That means I will need to find a bigger box in about a week and a half! 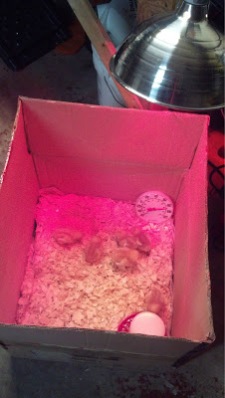 Say hello to Cecilia, Reba, Agnes, Beatrice, Lady, and Dolores. Yes I named them. No I don’t know who is who. 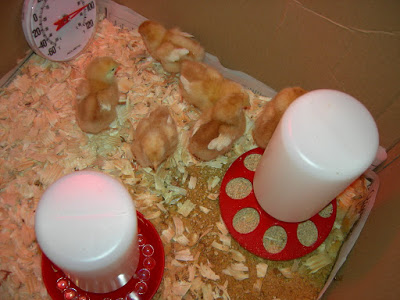 As you can see, they make a mess out of their feeder. Right now they eat a chick starter in the form of crumbles. It is medicated and has an 18% protein ration. While they’re young, chicks need feed with 18-20% protein (24% if they’re broilers). When they get to be 8-10 weeks old, we’ll switch them to a chick grower feed, which has a little bit less protein. Then at 14 weeks they will switch to a maintenance ration, and at 20 weeks we will switch to a laying ration.

We also put marbles in the waterer to keep them from drowning themselves. 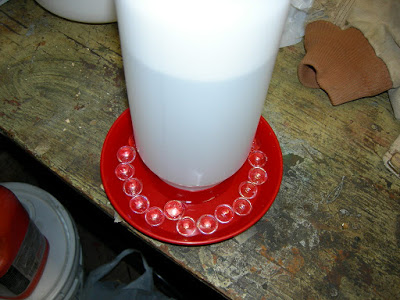 This is my first time raising chicks! As they grow I’ll share pictures, and things we learn along the way. I figured I can do a weekly update to show how they’ve changed and new stuff we’re doing with them. We are looking forward to fresh eggs!

Wednesday things with QE2.
Ended up with 60 miles at the #lakeridgeendurancerun 24 hour race this weekend. I fought some serious mental battles early on in the race and finally flipped the switch about 19 hours in. Thankful for sharing some miles with friends and for my husband crewing me and volunteering overnight. Thanks @trailadventurerunning for another great event!! #trailrunning #ultrarunning
Preparing for the #lakeridgeendurancerun 24 hour this weekend! Hope I have enough snacks 😊 #trailrunning #ultrarunning #LRER
A Labor Day tradition. Let’s do fall!
My little sister @wray_ofsunshine got married yesterday 🥰. She looked so gorgeous and we all had such a great time celebrating her and @ryanmichaeldurham. Congratulations and best wishes to you both. We love you! 💜
Happy 9th Birthday, Scout! 🥳 My how time flies. #bloodhoundsofinstagram