This past week was my last ‘free’ week before I start following a six week base training plan. My focus is going to shift primarily to running now, and I guess I kind of subconsciously took advantage of that fact this past week. I ended the week with three running days and three cross training days. Here’s a recap of last week’s workouts, as part of the Weekly Wrap linkup hosted by HoHo Runs and MissSippiPiddlin’. 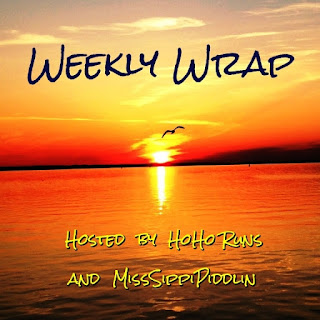 Wednesday – Afternoon 35 minute trail run at the state park. I was happily surprised to find I didn’t have to pay the $4 fee to get into the park, because of the Veterans Day holiday.

I’ve talked about how all of the leaves on the ground can make the trails hard to follow this time of year. But while I was out on my run I also thought of a good thing about the leaves – you naturally make more noise on them. The noise helps scare off wild animals, or at least make them aware of you, so that you don’t startle them. I’ve had an encounter with a black bear while out on a solo run before, and I don’t care to do so again.

Thursday – Cross training: core work sequence. Then Barry and I watched the Hokies beat Georgia Tech. It was exciting to see them pull off a win, especially since our head coach, Frank Beamer, recently announced he will be retiring at the end of the season. He has been the head coach of Virginia Tech’s football team for 29 years (longer than I’ve been alive).

Friday – I had planned to run, but decided to cross train instead since we were having wind gusts of 55 mph all day. So I did a 30 Day Shred level 1 workout. My usual cross training shoes still have insulation stuck to the bottoms, so I used an older pair of shoes. Black shoes make me feel kind of hard core 🙂

Usually I use our TV while cross training along with a DVD workout. But this time I used my laptop so I could keep the news on the TV to follow the attacks in Paris. Just awful, and my thoughts and prayers go out to them.

Saturday – Evening 45 minute trail run. I spent the majority of the day making plans/lists for Thanksgiving and then running several errands. I got out to the trails at Pandapas Pond a little later than planned, and was worried I would have to cut my 45 minute run short. I started with a 30 minute out and back.

When I got back to the parking lot I decided I could probably sneak in the last 15 minutes before sunset and headed down another trail towards the pond. I watched the sun start to sink behind the ridgeline as I ran.

I was focused on making it to the pond before sunset, and I succeeded. Then I got the treat of watching the sunset, which was pretty spectacular (I didn’t capture it very well, though).

All of a sudden I realized the fact that the sun had just dipped behind the mountains meant it was going to be dark soon and I needed to get back to the parking lot (about 6 to 7 minutes away).

As I made my way back, I encountered two men who asked if I had seen a stray horse. A what? I told them no I had not, and they further explained that one had gotten away from their group in the parking lot. I made it back to the parking lot just as nightfall was moving in. The rest of the group which had lost a horse was there, and I asked if they needed anything. They said they did not and I wished them well on finding their horse. I suggested contacting the park ranger (Pandapas is part of the Jefferson National Forest) and they said they had just gotten off of the phone with the state police, who were going to notify the rangers. I sure hope they found their horse!

Sunday – Afternoon 4 mile run. I decided to do some exploring and headed down to the Austinville/Lead Mines area to check out a different section of the New River Trail State Park (a 57 mile long rail trail).

I ran 4 miles and got to run past a cave and through an old railroad tunnel along the river.

Just before the tunnel, hanging on that apparatus, are yellow plastic chains. They represent the old telltales, from when the New River Trail was a railroad. Telltales were used to let railmen on top of the roof know that the train was approaching a tunnel, bridge, or other low structure. The telltales, often made of leather strips or rope, would hang down lower than the lowest point in the tunnel or bridge and act as a warning to let railmen know to duck or get off of the top.

It was a gorgeous fall day outside, with temperatures in the upper 50’s, and I’m glad I decided to go explore a new part of my usual trail.

Today begins a six week stretch of base training. It’s time to lay a good base of miles to build upon through this winter and leading into the spring for upcoming spring races!

Have you ever heard of railroad telltales?
What are your workout plans for the winter?
What would you do if you encountered a stray/loose horse while out in the woods?