This first picture was taken at a storage building sales lot in the area. I recently noticed that they are selling chicken coops fashioned out of outhouses!

Next, we have a photo of a pay phone at the gas station nearest to our house. The pay phone itself is no longer there, but I thought the replacement was pretty funny. Is that how they did it before we had actual pay phones??

Third, a picture of something that is often seen in my house. When Hank was a puppy, he spent more time around dairy cows than he did around other dogs. As a result, he seems to have a bit of an identity crisis. There are many things he does that are in the way a cow would do it, rather than how a dog would do it. One example of this is how he scratches his head/ears/chin. Most dogs would sit down and use their back leg. My dog does it cow-style: 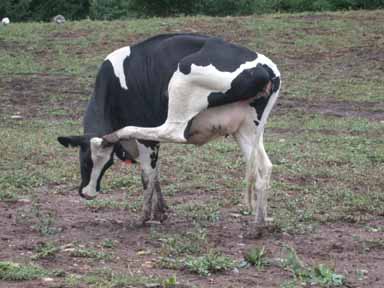 I saw this picture on the Run the Edge on Facebook and thought it was too funny:

Finally, I received a text message last weekend from my Sister-in-law, who was visiting her best friend in Boston. She also took this same picture for me last year, and I think it is becoming a tradition.

What things have you seen around your town?

Don’t forget about my Spartan Race giveaway! The giveaway will remain open until Thursday, April 17 at 11:59 PM EST.

4 thoughts on “Seen Around Town”