Thank you for all your advice and input yesterday! Y’all definitely helped me look at it in a different way than I was thinking about it. All my brain could think was that I never run the day before a long run, not that a 3 mile run shouldn’t be enough to destroy my long run. With that being said, I took the “suck it up buttercup” route and ran an easy 3 miles this afternoon. I should note that Barry did not think I should have run today, so if my long run is a disaster tomorrow I will have no sympathy from him.

I’m still feeling tired (the sleepy kind of tired) but hopefully another night’s rest will help with that. I took it easy this morning and then I just couldn’t skip a run this afternoon with it being 53 degrees outside! That means shorts and a t-shirt!! I ran an easy 10:27/mile pace on the trail in town.
During mile 2 of my run I got chased by a black pomeranian-type dog. It was a small dog, probably not more than 10 pounds at the most. However, it was barking and growling like crazy and chased me down the trail. Small dogs bite, too, so I kicked gravel at it. This made it stop for a second, as I think I startled it, and then it chased me some more. So for about 2 tenths of a mile I picked it up to 8 minute pace. Shortly after this I got super dizzy, but I didn’t feel like I was too hot or anything. It was very strange, but it went away within the next half mile.
After my run I stopped by Magic Mart (similar to a K Mart) to pick up a few things, including these delicious things: 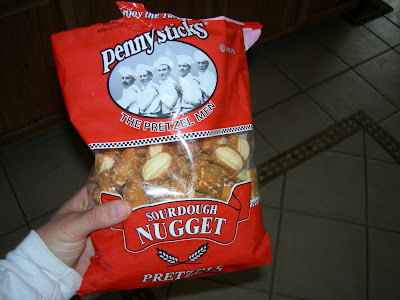 Sorry I failed to take a picture before opening the bag. I was hungry and they were good, and the picture was an afterthought.
I think it’s really pretty in town right now. All of the snow has melted around town but there’s still snow on the mountains, which looks really neat. I tried to capture it in this picture while I was stopped at the caution light.
Speaking of traffic lights, I have been a yellow light magnet lately. It’s starting to get really ridiculous. Basically what happens is as I am approaching a green light it turns yellow right as I’m just far enough away to still have to stop. There are three stop lights that I go through in town to get to the trail, and I get stopped at each one. This same phenomenon happens to other people when they are driving and I am in the car. I guess I’m bad luck when it comes to red lights or something?
Since it’s so pretty outside today I spent some time in the backyard playing fetch with Hank and Scout. They had a blast. 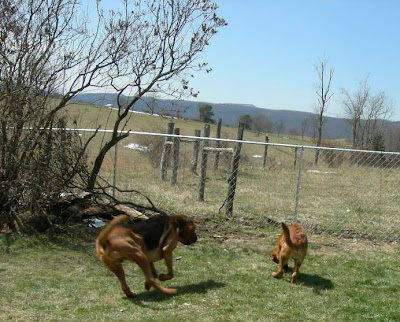 Hank loves to pose for pictures: 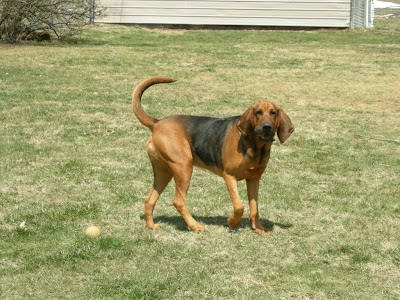 Scout enjoys chasing and “kicking” the soccer ball as well as the tennis balls and practice soft balls that we play with: 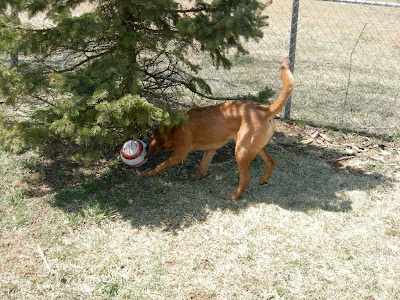 And after about 10 minutes of playing they were both tuckered out. Hank keeps his eye on the ball, though: 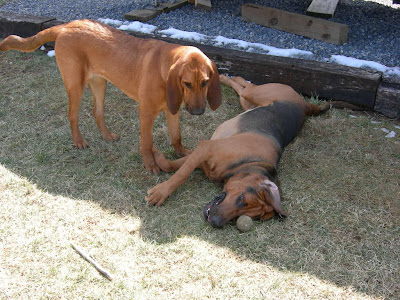 And then Scout decided she was thirsty and proceeded to eat what little snow was left by the camper: 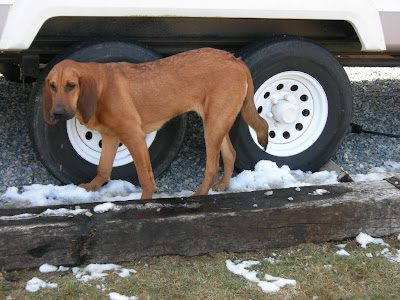 Speaking of dogs, have you seen this Iams commercial? I think there’s a newer Iams commercial now, but this one is so cute. Especially right at the very end! Irish Wolfhounds are sooo big!

If that doesn’t make you smile, I don’t know what will.

Is it looking like spring, yet, where you live?

Do you like sourdough pretzels?
They’re my favorite kind of pretzel!

What are your weekend plans? Doing anything special for Easter?

10 thoughts on “Toughen up buttercup”