Barry and I headed up to around 6:45 this morning for the Shamrock Hill Run 10K. When we left the house it was around 46 degrees and sprinkling. On our way up the interstate it started pouring rain, but then it stopped. It poured again after we got to the high school, where packet pick-up was, but luckily it passed and the sun came out for the race. We picked up our packets, hung out in the car for a bit, and then headed down to the start line for the race. At 9:15 on the dot they fired the gun and we were off.

The first few miles of the race started out with an out and back with rolling hills and a couple of significant climbs. I felt comfortable through mile one, and just focused on running a comfortably hard pace. Things got a little chaotic, as 5K’ers started heading back for the finish. They only had the right side of the road blocked off, so there were runners going both directions on the one side. At one point there were 5K’ers on their way back on the right and left sides of the road, with the 10K’ers and some 5K runners going straight up the middle.
I actually started feeling fatigued during mile 2. I told myself to suck it up because there were 4 miles to go and I wasn’t about to back down. To keep my mind occupied and distracted from the fatigue, I started picking out people to try and pass. This went on through mile 3. I remember sometime between mile 2 and 3 running past two different junkyards that had guard dogs behind the barbed wire fences. They were barking like crazy at all the runners going by on the road.

After we passed mile 4, I picked out a guy up ahead  (officially nicknamed “green shorts guy”) and decided to just stay with him. About halfway through mile 4 there was a split where first loop 10K’ers go straight and those headed for the finish turn left, but there wasn’t any signage to indicate this. When I went by the split, the lady who was supposed to be directing us was talking to someone and wasn’t directing the runners. I went straight, but spent about 10-20 seconds worrying I had gone the wrong way and was headed for the finish. I actually stopped and looked back to make sure other runners who I knew were on the first loop had gone straight. They had, so I kept going, following green shorts guy. Just before mile 5 we switched from the road to a paved path that I think was part of the greenway system in . We climbed a big hill, passed the mile 5 marker, and headed into the last mile of the race.

During the last mile we got back on the roads and climbed two more hills before heading downhill to make the final two turns for the finish. I saw Barry as I came down the hill, and he cheered me on and told me I was almost there. We ran on a flat stretch of road briefly and then made the last turn to the finish. There was a short, steep hill to climb, and then a short steep downhill to the finish line. Just before the last turn I actually edged ahead of green shorts guy, but he surged at the finish and I couldn’t keep up. I did manage to hold off the other guy behind me who pushed hard at the end. I crossed the finish line at 57:21 according to my watch.

Here is the elevation profile from my watch. Nice little spike at the finish, huh?

Once I crossed the finish line, I walked up the next hill with Barry and sat down on the curb. Just up ahead there were baby pools full of ice that had water bottles in them. Green shorts guy grabbed two and brought one to me and told me good job. Although we had kind of run together during the race, we never said anything to each other until then. It was really nice of him and I thanked him. I bet if I had “chicked” him (passed him) at the finish, he probably wouldn’t have brought me that water. But who knows. 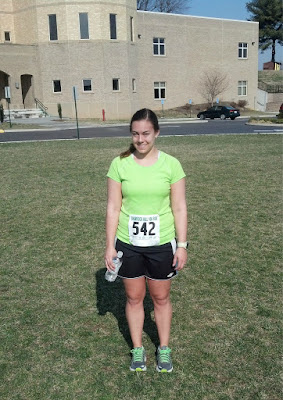 We meandered up to the car, I grabbed my phone, and we made our way over to the high school gym for a little post race food. We checked the results and found Barry had placed 10th overall and 1st in his age group! He had a great race, running it in around 44 minutes. So we stuck around for the awards ceremony so he could collect his hardware.

They also had door prizes and I won a Virginia Tech pillow! Any Hokie can attest to how cool it is to win anything VT related. It’s funny (and ironic) that I have won prizes during drawings at this race and the Blacksburg Classic in February, because those are the only two races since I’ve run since I started my blog. Previously, I can’t remember ever winning anything at drawings after races. Guess the blog is good luck! 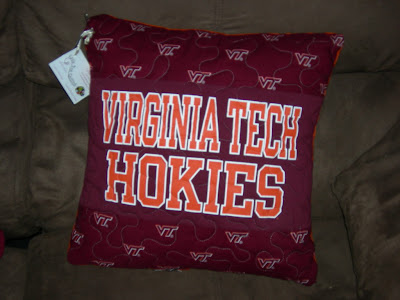 Barry also won a “picnic basket”. It’s a soft cooler that’s got an insulated compartment and a spot for other dry goods/paper products. Pretty neat! Notice he’s also wearing his new medal for placing first in his age group (which was a big one- 23 to 29!). 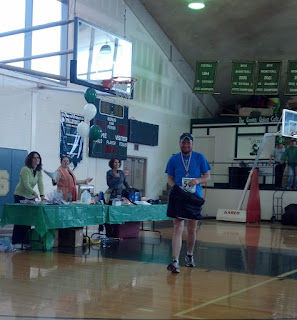 Overall this was a really enjoyable race. It was smaller, with around 300 participants. I felt like the organization was good, and everything went smoothly except for the lady who wasn’t directing runners at the split. This was the first year they have had a 10K option, and it was our first time running the race. In the past they’ve had a 5K and a 1 mile fun run, and I believe it was the 23rd year overall for the race. The weather was also really nice, too, which always contributes to a good race experience, even though it’s something that’s completely out of the race director’s hands. 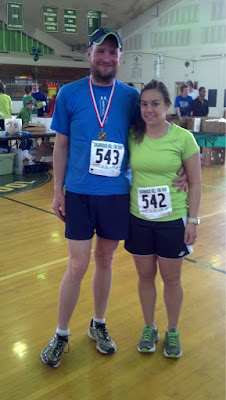 So 57:21 is now my 10K PR. Let’s hope this doesn’t go like my track record with half marathons did. I ran a 2:06 at my first half marathon and then it took me 7 more to finally beat that time.