As I was walking around at work today, I felt like I had something stuck to the bottom of my right shoe. When I looked at the bottom, I found that the bottom flap was actually falling off! I spent the rest of the day making a flapping noise everywhere I went. I’ve had these boots for maybe 4 years now, and I guess I finally wore them out. I know certain people who would put duct tape around it and keep wearing them, but that’s not really my style, so I guess these boots are done. At least I have two other pairs 🙂 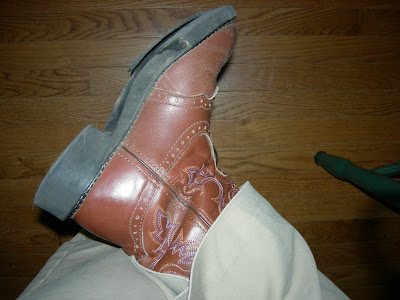 I started off this morning with Jillian 30 Day Shred. Today was my first day at level 2, and I thought it was definitely more challenging than level 1. There was a lot more emphasis on shoulders and by the end of the cardio in the third circuit my quads were on fire. Here’s to nine more days at level 2!
This evening I headed out for a 5 mile run. I ran on the roads around our house, which means it was a hilly run. There’s this funny thing that happens when I go the direction I went today that I want to share with you. I call it “waking the neighborhood”. The first four or five houses I run past have between 2 and 3 dogs that are either tied out in the front yard or are fenced in, in the backyard. As I run along the road they all bark one group after the other. The same thing happens at the end of my run as I go back by. It reminds me of the dogs relaying messages to one another in 101 Dalmatians when the puppies get stolen. Mr. Boy also ran with me for the first 3/4ths of a mile or so and he went and said hello to most of the dogs as we went along. My legs were feeling tired from Jillian this morning, so it was a slower run. I’m glad I went, though, because it was so cold and windy when I got home I really wasn’t feeling it. But I don’t regret it now, which I guess is what all the magazines are always telling us- you usually won’t regret going for a run once you get out there. I am happy to be back inside and out of the wind for the evening, though.
Have you ever had a show blowout?


What was your run or workout today?

One thought on “I broke my boot!”