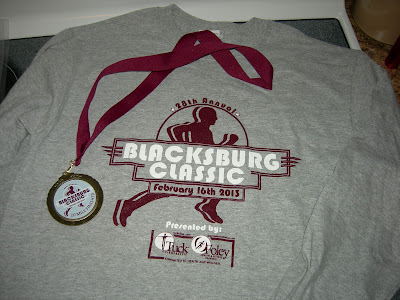 Bear with me because this is my first-ever race report. Hold on to your potatoes, this will be a long post! Don’t worry, there are a lot of pictures at least. A few “action shots” are blurry… sorry about that!

This was the second year I have run the Blacksburg Classic 10 Mile. Today it was 29 degrees, a little windy, and it was flurrying on and off. I really enjoyed being back in , which is where we moved from last May (also where I spent 4 years of college and 1 summer of high school). The race starts and finishes in front of an elementary school and is run primarily on my old stomping grounds: the Huckleberry Trail, a paved bike trail with rolling hills. Barry was so nice and ran with me the whole way and even snapped a few pictures of me! Check out the race elevation.

The race has an afternoon start time of 1 PM. Since February is typically colder, this gives the weather a chance to warm up a bit. When a race doesn’t start in the morning, it can be hard to figure out what to eat and when, but I felt like I handled it pretty well today. I got up around 830 AM this morning and had my usual morning coffee. I also had apple cinnamon oatmeal for breakfast. 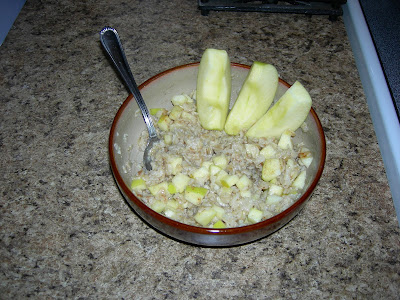 Around 11:30 AM it was time to head up to , and I brought a Wild Berry PowerBar along with me to eat around noon. Usually when I’m doing a race/long run in the morning I’ll eat either a PowerBar or a Luna Bar about an hour before I’m planning to run, so I mimicked this by eating at noon today. It worked out well and I never felt hungry during the race.
We got to around 12:15 PM and headed in to the elementary school gym to pick up our packets/race bibs and use the restroom. After that we made the short walk back to the car to drop off our stuff. I pinned on my bib, grabbed my water bottle and iPod, and we headed back to the school to keep warm inside until the start. Around 12:55 PM we left the warmth of the school and made our way to the start line. Just a little after 1 we were off! 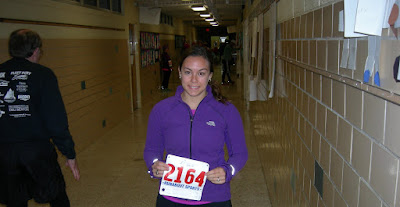 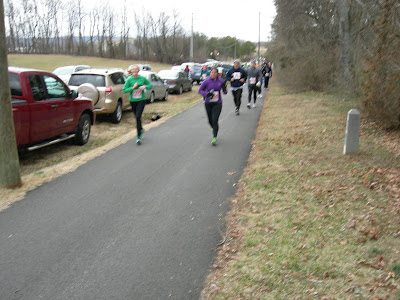 Just before mile 4 we turned on to the Huckleberry trail, where the rest of the race would take place, for the most part. I was still feeling good through miles 4 and 5, but my pace was slowing. After mile 5 we got into the hills of the trail and I started feeling more tired. At this point my average pace was still right where I wanted it to be- setting me up to beat last year’s time of 1:40:40. At the top of the first hill there was a girl standing on a bench, with a maraca-type noise maker, cheering everyone on. She was really enthusiastic! As we passed mile 6, I ate two Cliff Shot Blocks (1 orange flavor and one mountain berry). I had 3 others with me, but I never felt the need for more.
mile 4: 10:21
mile 5: 10:20
mile 6: 9:58

Mile 7 was flat and I tried to pick it up. We reached the turn around point and we u-turned and headed for home. We had more up hills and down hills during miles 8-9, and my pace really shows it. We saw maraca girl again, still on her bench and cheering her head off, just before we hit mile 9. After we passed her, we went down a hill and then hit a significant up hill. This hill used to be where I would end all of my long runs when we lived in (we lived 2 tenths of a mile from the top of this hill), so I am very used to running up it on tired legs. It makes things easier on the mental side, but doesn’t make the physical task of doing so any easier. When we topped the hill we had about 3/4ths of a mile to the finish. During this part, I kept feeling like my right calf was about to cramp up. I felt like if I pushed any harder I was going to be in some serious trouble. It never did, though, and I pushed on. With about 3 tenths to go there is a gradual incline and then you turn the corner and head for the finish line.

After the race, we headed in to the elementary school gym and grabbed some post-race food. They had orange slices, whole and sliced apples, bananas, bagels, granola/chewy bars, and cookies available. 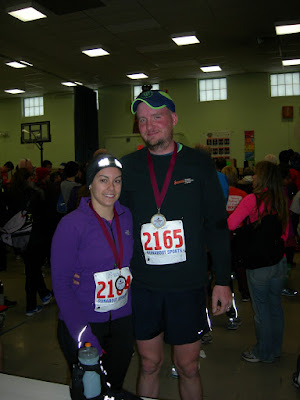 We hung out and watched the awards ceremonies and waited for the raffle. RunAbout Sports (the local running store) always has some great door prizes at their races. I’ve never won in the past, but today I was a winner! 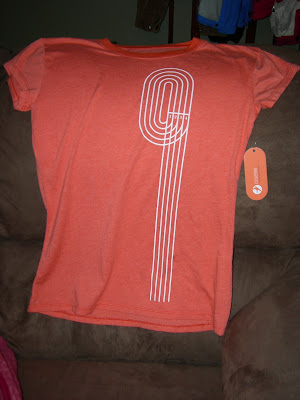 My very first piece of Oiselle apparel! I’m pretty excited to have this, as I have seen/heard about their apparel on other running blogs. All of their stuff is really cute and I’m excited to get to try out one of the shirts. Now I can run with my “head up, wings out”, a Oiselle (pronounced wa-zell, french for bird) motto.

After the raffle Barry and I headed over to a local restaurant in town called Cabo Fish Taco. I love their beer battered shrimp tacos and that’s exactly what I ordered. Come to think of it, I’ve never actually ordered anything else there. I guess I like them so much I just don’t want to try anything else. I brought one home for me and it may or may not make it to tomorrow 🙂 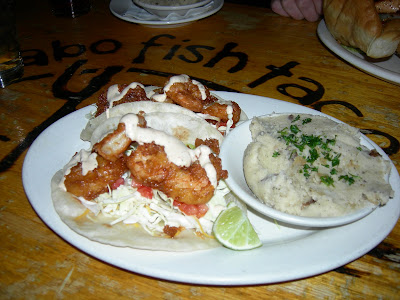 Now we are home, enjoying being inside and warm. I think we’ll spend the evening catching up on our DVR shows…. I can’t wait for this week’s Modern Family! It’s my favorite. I’m feeling pretty good after today’s race. My lower back and hips are a little sore, but other than that I’m feeling alright. We’ll see what I have to say when I wake up tomorrow morning.
I just had to share this one last picture. I snapped it of the kids as they took off for their 1 mile fun run before our race started. Running at it’s purest right there! 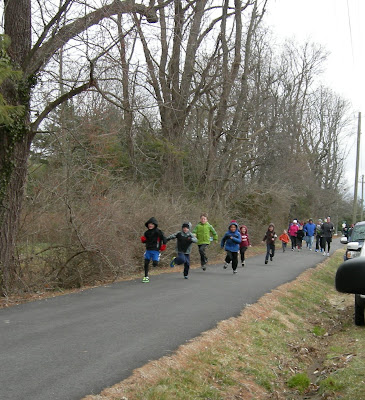