Technically it came yesterday, but it was so windy yesterday afternoon/evening that I didn’t go out to get the mail until this morning. Running Times is my favorite magazine (People is a close second and third would be Runner’s World). All of the columns are really interesting and I like trying to incorporate training ideas into my own training (although I usually have to tailor it to my speed/ability).

I am sad to report today was another tough run. I met up with my running buddy at the local trail this morning. It was crisp and clear outside, just a little under 30 degrees and slightly windy. We ran 6 miles, but neither one of us felt that great today. Her legs just didn’t seem to want to go and I was feeling sluggish as well. The muscles in my back were also feeling sore and fatigued today. I’m not sure why it’s feeling that way, but I’m going to rest today and do some icing and stretching (if I can figure out how to stretch the middle of my back…).
The trail itself got pretty interesting at times, due to the flooding we had last week. The trail is paved for 0.8 miles and then switches over to crushed gravel, and it follows a creek. There were areas of the trail that were still underwater today and other areas that had been washed away, leaving large gaps. Other areas were covered with large rocks and mud from the creek bottom, and there were a few branches across the trail. We were practically trail runners for the day. Of course I didn’t bring my camera so I have no pictures to show you…. sorry.
This week I’m going to cut back my mileage in hopes that it helps me feel better. Maybe a cutback week is what I’ve been needing? I haven’t been increasing my mileage, but I have kept it around 20 miles per week, give or take, since Christmas. I have a 10 mile race coming up next Saturday. Initially I was wanting to beat my time last year (you know… shoot for the moon, aim for the stars kind of stuff), but now honestly my goal is to run the entire thing. I ran this race last year and it takes place on my old stomping grounds, so I’m very familiar with where the hills are and how tough they can be. The catch is I haven’t run on that trail in quite awhile. Hopefully everything goes well. Maybe I will surprise myself, get out of this rut I’m in, and have a good race. That is the power of running with hundreds of other people. 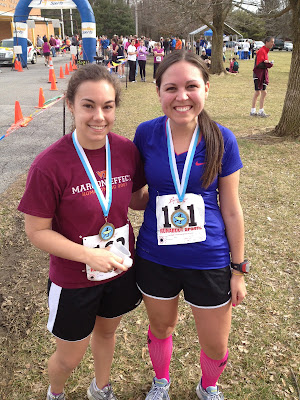 That’s a picture from last year’s race, borrowed from Nicki. I actually met her through her running blog and we ran together for close to a year before she moved to Texas. I met my current running buddy through her, as they were already running together when I joined the party. We ran about half of the race together last year. Don’t mind my frizzy out of control hair and my inability to not look like an alien while having my picture taken.

2 thoughts on “Another tough one”