I am home sick today. That head cold that was coming on has arrived. Don’t worry, though, because I found comfort on the couch while watching Fame, The Princess Diaries, and the first Harry Potter movie. I also have two buddies who are more than happy to spend the day napping/watching movies. 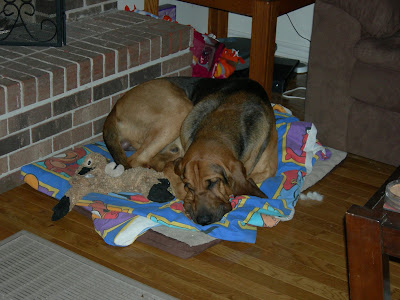 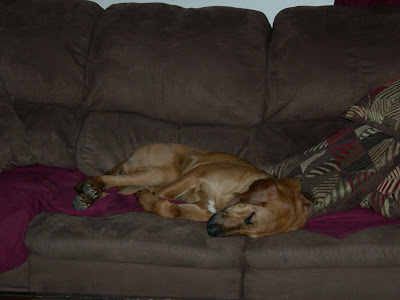 I intended to attempt a run today, even if I couldn’t go to work, but I really don’t feel up to it. Also, we are having strong thunderstorms, high winds, and a chance of tornadoes this afternoon/evening…. that’s enough for me to stay inside.

Did anyone hear about the Spanish athlete who showed a true display of sportsmanship at a cross country race in December, instead of taking advantage of another competitor’s mistake? I came across this article through the Richmond Marathon facebook page.

Abel Mutai of Kenya, number 7 in the photo, had opened up a gap that made him the sure winner. But then he pulled up 10 meters short, mistakenly thinking he had crossed the finish line. Ivan Fernandez Anaya, the athlete in the green singlet above, was running in second. Mutai’s mistake gave Fernandez Anaya the chance to blow by him and win the race. Instead, Fernandez Anaya used gestures to direct Mutai to the finish line, all while staying behind him. 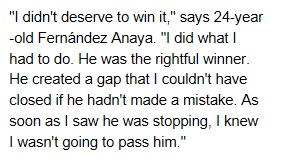 Fernandez Anaya’s coach, Martin Fiz, stated that although the gesture made Fernandez Anaya a better person, it did not make him a better athlete. Fiz states that “you have to go out to win every time”. However, Fernandez Anaya goes on to explain that at this particular cross country race there was nothing at stake, except maybe bragging rights if he had won (Mutai was a bronze medalist in the 3,000 meter steeplechase at the London Olympics). He states that if there had been higher stakes, such as a European medal, then he would have exploited Mutai’s mistake to win. That’s quite impressive and speaks a lot about his integrity.

I think Fernandez Anaya did the right thing and showed us that even at higher levels of competition winning isn’t everything. Sometimes it’s more important to be a good human being, even if your coach doesn’t approve.