I had a pretty good run today, which was good because after a string of tough runs I needed a good run. After work I ran 6 miles at 9:57 pace on the roads around our house. It was 21 degrees outside, but it wasn’t too bad because it wasn’t windy. The sun started setting around halfway through my run though, and it started to get colder which made me feel pretty chilled at the end of my run.

Speaking of the end of my run, I was joined for the last half mile by a dog we call Mr. Boy (we don’t actually know his real name). He is a free roaming dog that lives down the road from our house. I often see Mr. Boy all the way in town, which is quite a feat for a dog the size of a Jack Russell since that’s about 6 miles away. Every once in awhile Mr. Boy will be out making his rounds when I’m out running and he’ll join me for a little bit. Typically he runs out in front of me on the road and will look back and bark occasionally. It’s highly entertaining. He ran down our road with me and up around the water tower, but stopped before we got to the house. I ran inside and got my camera, but he had already gone on. Maybe I’ll get a picture of him another time to show you.

One other item of note from today’s run: I ran in my new pair of Asics GT-2170’s. This is my third pair since they switched from the 2160s to the 2170s, and I love them. They feel great right out of the box, although I always make sure to break them in before taking them out for a long run. These ones are dark grey and pink, a new color for the shoe (as far as I know). 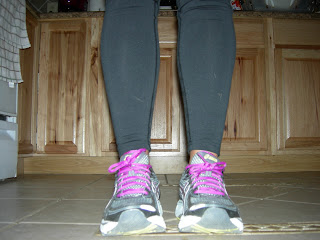 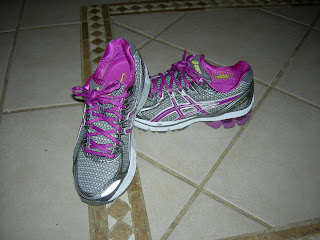 Now I just have to keep the puppy away from them….